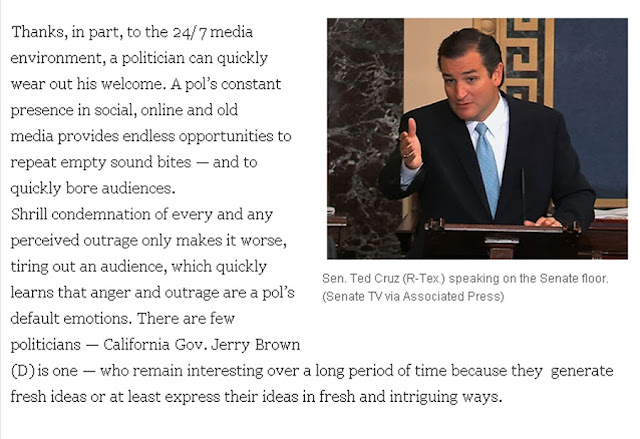 The oft-linked and reliably insane Jennifer Rubin of the Washington Post begins her hatchet job on Senator ted Cruz by pretending that she loves how "interesting" Jerry Brown is by way of him being a liberal with fresh ideas.

This is an interesting pivot for Rubin because you can't just come out screaming and throwing hapless cats around when you attack an unpopular Senator--you have to make yourself look reasonable by praising someone who is inconsequential in American political life.

And this is the sad part--Jerry Brown is not inconsequential. He is turning around the biggest state in America with good government, competence, and an insistence on applying the values liberals love to how things should be done. You can hate on California all you want, but Brown is ten times the governor Arnold ever was and he has a good chance of fixing more problems than he creates.

Rubin's pivot against Cruz is a safe bet. There's no way Cruz will beat Mitt Romney in 2016, even though neither man has a chance at winning the nomination to be defeated for President of the United States by Hillary Clinton. Now that Cruz is being buried, Rubin wants a chance to throw a shove full of dirt on him and run away. So, the most interesting thing here is here strange praise of Brown while failing to acknowledge just how she has tired out her own audience with these batshit crazy diatribes that are thrown from a safe distance.
on October 28, 2013