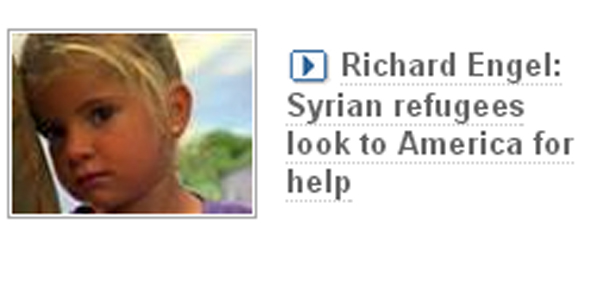 The website for NBC News is using images like this, linked to videos, to make the case that we should let loose a stream of cruise missiles at the Syrian people.

Never mind the logic--using imprecise weapons to weaken a regime that will hide weapon systems among civilians is the quickest way to kill more children than the Syrian regime could ever hope to kill is baffling and disgusting enough. But the marketing campaign to give John McCain another war that he always wanted is sickening.

Do you want to do something about the fact that someone used chemical weapons in Syria? Then vote for people who trust diplomacy and engagement, not bombing campaigns and failed United States Senators. There should be a coalition of 60 countries standing against Syria and Russia and China right now but there aren't because we have failed to maintain credibility when it comes to standing up for human rights. We threw that away when we invaded Iraq and tortured and bombed civilians. We gave it away when we embraced drones and slaughter without so much as a care in the world about our overall strategic vision and the rule of law.

Syria is a rule of law problem. If we were in possession of even a shred of credibility, we would have no problem bringing the full weight of NATO behind our effort to act in the place of the United Nations and punish the Syrian regime without having to blow up residential blocks. You see, the Syrian civil war is doing that already. Why speed the process along when the only way to end a civil war is to let the people fighting it get to a point where they have to stop?

You'll have to excuse me for not wanting to go to war based on what the media and what failed members of the United States Senate believe to be the truth.
on September 04, 2013