Remember When We Were Supposed to Bomb Iran?


The people of Arizona are still not completely in love with their senior United States Senator.

I seem to remember a time when John McCain wanted us to bomb Iran. Mother Jones has even made a map of all of the countries that McCain has wanted to bomb over the years. 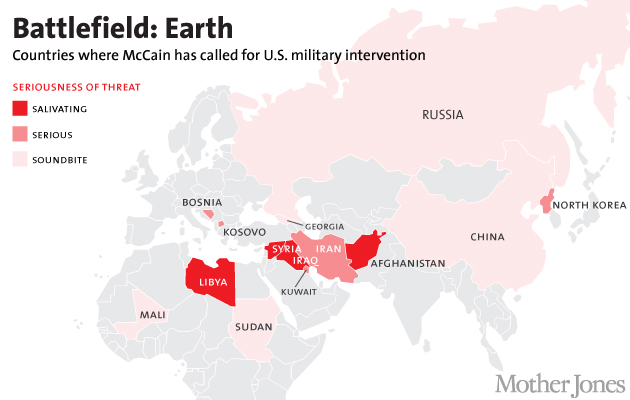 We did not bomb Iran, however, and it is important to note that this was directly in opposition to everything McCain was saying. To date, Iran has not developed nuclear weapons or bombed anyone else (Israel) or taken over the world like any respectable supervillain state would probably have done by now.

When you consider how completely and utterly wrong people like McCain have been about everything, and especially about Iran, you have to wonder why anyone puts him on television. Or lets him walk around in public. Or who takes care of his needs when he's through playing video poker.

Now, for those of you who haven't been paying attention, there was a hysteria that persisted for years over the fact that Iran has nuclear power and centrifuges and bunkers or something along those lines. Iran was the worst thing since Hitler times twenty. Iran deserved precision airstrikes and indiscriminate bombing. Iran was our biggest threat and Iran was a dangerous country full of madmen.

Well, hold on. We never bombed Iran. And now we're going to bomb Syria, which is the worst thing since Hitler times infinity and it's dangerous and full of madmen? And we're supposed to trust the judgment of a man who got it wrong about Iran every time he opened his mouth?

At some point, you have to stop bombing everyone, or wanting to bomb everyone, or being an old man who just hates the world and wants to see it burn because FREEDOM!
on September 06, 2013
Email ThisBlogThis!Share to TwitterShare to FacebookShare to Pinterest
Labels: Commentary, Credibility, Defense, Fraud, Military, News, Opinion, Politics, War, World