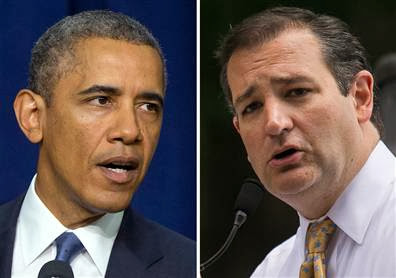 To the everlasting chagrin of every Republican not named Ted Cruz, we're seeing two great rivals go head to head:

Thousands of workers and the American economy stand to lose if the government shuts down next week, but some political leaders might see their hands improved by such a crisis.

Nearly every economist warns of negative repercussions for the U.S. economy should Congress fail to forge an agreement to fund the government’s day-to-day operations past Sept. 30. But a handful of Republicans – and even President Barack Obama – are among the select few Americans who have something to gain should negotiations fail and a shutdown come to pass.

The fact that it’s in the political best interests of some people (or groups) to force a government shutdown has actually contributed to the fiscal impasse, which shows no sign of resolution with little more than a week to go until all but the most essential government functions cease.

Cruz is now the de facto head of the Republican Party. Senators and governors and politicians all over this country with far more experience and capability have to follow their new leader straight off of the cliff in the weeks ahead.

They elected this man. He has a constituency that commands respect. He's out of his mind, but that's a feature, not a bug.