Pacman and Peso Will Do Anything For a Buck 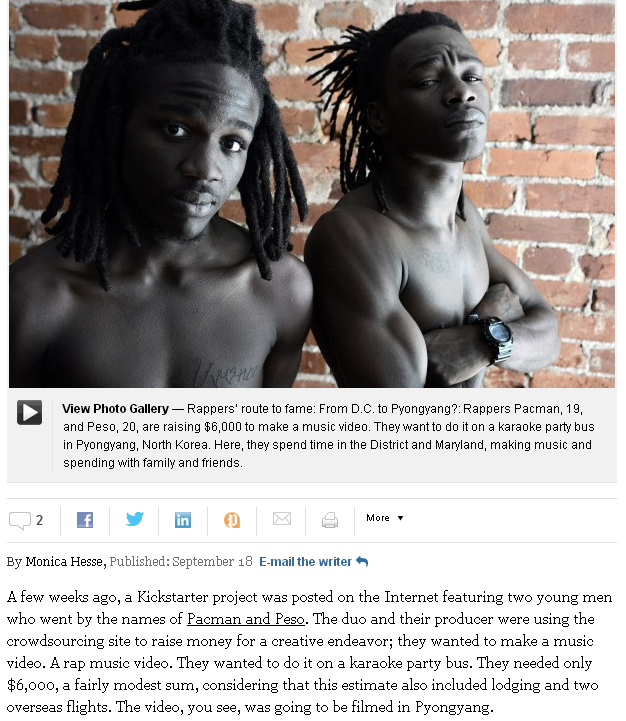 This has to be the dumbest stunt anyone ever pulled in order to gain virtually no fame whatsoever. Who's going to watch these two idiots in a video shot in North Korea?

ENTRY / EXIT REQUIREMENTS FOR U.S. CITIZENS: Travel by U.S. citizens to North Korea is not routine, and U.S. citizens crossing into North Korea without proper documentation have been subject to arbitrary arrest and long-term detention (see Travel Warning ). You must have a valid passport and a valid DPRK visa to enter North Korea. The U.S. government does not issue letters to private U.S. citizens who wish to apply for DPRK visas. If you plan to enter and depart North Korea through China, you must obtain a multiple-entry visa for China, because a valid Chinese visa is required to enter China after leaving North Korea at the conclusion of your visit. Routine travel from South Korea to North Korea is prohibited. Travel across the demilitarized zone (DMZ) is allowed only infrequently for official and government-authorized cultural and economic exchanges or aid shipments. Commercial airlines do not operate regular flights between South and North Korea.

If you arrive in North Korea without a valid passport and a valid DPRK visa, you may be denied entry, fined, detained, arrested, or imprisoned. North Korea has imposed heavy fines and long prison sentences with hard labor on persons who entered the country without the proper documentation. Even with the proper documentation, visitors may be subject to arbitrary arrest and imprisonment and may not receive appropriate legal protection against inhumane treatment.

Internet access is limited to non-existent, and many hotels do not offer international telephone calls. If you use a cell phone in the DPRK, please keep in mind that mobile telephone networks are operated as a joint venture with the North Korean government. You have no right to privacy in North Korea and should assume your communications are monitored. If you bring electronic media, including USB drives, CD-ROMs, DVDs, or laptops, into North Korea, you must assume that North Korean authorities will review the information on those devices. Please be sure that the information contained on those devices does not violate North Korea’s laws or regulations. If you violate North Korea’s laws, knowingly or unknowingly, you can be harshly punished, even for offenses that would not be illegal in the United States.

How delusional are these two? They are backed by some serious idiocy:

“This trip will be a fantastic opportunity for Pacman and Peso to meet young, dynamic people and significantly broaden their horizons,” read the proposal, which was posted Aug. 30, “in addition to jump starting their musical careers.” The title was straightforward and surreal: “Pacman & Peso Make a Music Video in North Korea.”

This sentiment comes from, in part, a manager who should probably give up on his dreams and get a real job:

Ramsey Aburdene has a slight build, a post-college beard and an earnest way of communicating that makes him seem both younger and older than his age, which is 24. By day he works in commercial lending. But Ramsey grew up attending District public schools and always dreamed, after college at the University of Connecticut, of returning to his home and forming a small production studio for rap music.