Notice How They Are Posing 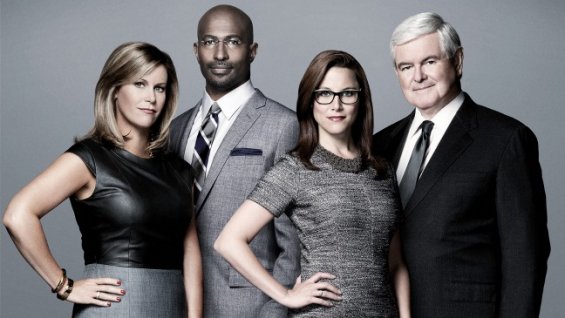 For some bizarre reason, CNN has decided to put Newt Gingrich on television and bring back Crossfire, which was a show that failed that now stars a man who failed to convince America that he knows something about how this country should be lead. No amount of spin will change that fact:

When CNN resurrects Crossfire on Monday, the show is set to include a one-minute segment at the end where the debate could turn to whether any agreement between left- and right-leaning pundits can be found. Host Van Jones called the planned daily occurrence a "Ceasefire" moment.

"The hope is that at the end of each show...we might have what we call a 'Ceasefire' moment where we actually try to explore any common ground that’s surfaced or any reason for hope that’s come out of this discussion," Jones told The Hollywood Reporter by phone on Wednesday. "We're not going to fake" any sort of takeaway though, he added.

That should make for some great television moments, especially when they are able to spend all of a half an hour discussing the topic or topics of the day. With Newt Gingrich, of all people. When someone involved in producing a news and information show has to specify that nothing on it will be fake, you have to wonder how long it will take them to do a show about Duck Dynasty when the ratings tank. Painted decoys or not? That's the topic today on Crossfire...
I mean, did anyone notice that they're building a show around Newt Goddamned Gingrich? He of the complete and utter FAIL of a Presidential campaign?
And, yes, S.E. Cupp is still a complete and utter moron:

“Having half an hour, or just under, to really dive deep, I think is going to be so much more valuable than the drive-by hits that most other shows give their viewers," said Cupp to THR. "I don’t think anyone is satisfied after four minutes on Syria, or the debt or any of these other issues. It’s just not enough time to have a meaningful conversation."

There was a time when a half an hour was considered insufficient for discussing anything beyond the most superficial of subjects; in the modern parlance, this is now way more than anyone needs. The fact that she actually said this in public is proof that no one associated with Crossfire really has any self-awareness. And did you know Gingrich is actually on it? A man with zero self-awareness who is probably still waiting for the recount that will make him President.

Crossfire is proof you can dumb it down all over again and sell serious television simply by asking the ladies to straighten their backs and stick out their boobs. I mean, look at that promo photo. It has Newt Gingrich in it. And who told Cutter and Cupp to stand like that? Talk about a WTF moment.
on September 05, 2013
Email ThisBlogThis!Share to TwitterShare to FacebookShare to Pinterest
Labels: Commentary, Content, Current Affairs, Discourse, Ethics, Facts, Fake, Journalism, Media, News, Policy, Politics, Television