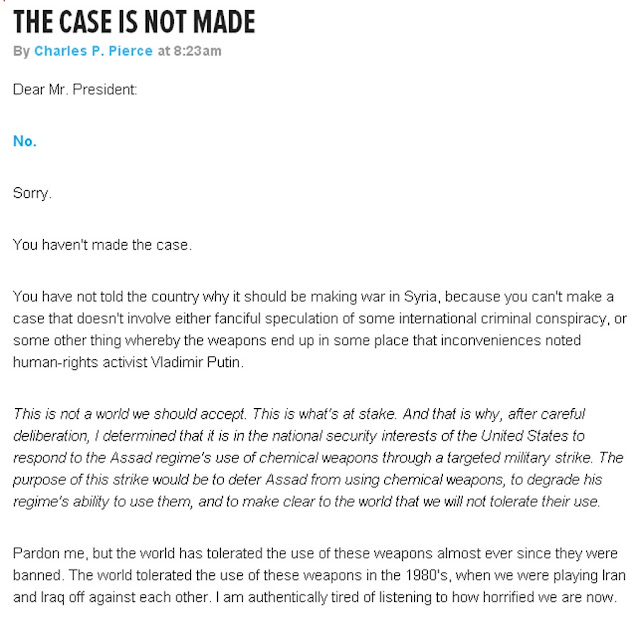 The left has turned on President Obama, but not in a huge way. There are domestic issues that prevent the thinking, rational left from completely disavowing this administration, and the Republican Party is still too crazy to be taken seriously on any issue, big or small.

I think this has more to do with the President's early status as a completely lame duck. We will see inaction and and neglect for vital issues continue up until the 2014 election. If the Republicans are not thrown out of office, en masse, and if the House does not return to Democratic control, the Republic is well and truly fucked. Permanent unemployment and an economy stuck in first gear are the reality that waits ahead for us.

A war might have kickstarted the economy in some respects by adding to defense spending. It might have bolstered certain markets and given us an opportunity to increase our trade with prospective allies in the "fight" against Syria. In particular, severing Lebanon from Syria would open up new customers. I think that the goal should always have been the elimination of Syrian dominance in Lebanon and the creation of new clients and customers there, as well as a concerted effort to destroy Hezbollah.

You can listen to these speeches only for so long until you realize that the real goal should be the isolation and destruction of Hezbollah. Selling that to the American people isn't happening and appealing to the public with stories of a limited chemical weapons attack hasn't budged thinking people at all.