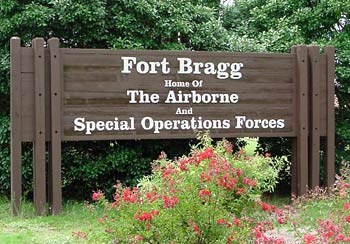 Fort Bragg is a military installation where damned near anything still goes:

A Fort Bragg soldier and his wife are accused of engaging in sex acts with dogs, filming them and posting the videos on the Internet, police said.

Ruben Chance James Fox and his wife, Amber Nicole Fox, both 23, of the 900 block of East Prospect Avenue, were arrested Monday morning, according to the Raeford Police Department.

They are charged with multiple counts of crimes against nature involving bestiality, disseminating obscene materials and conspiracy, police said.

Amber Fox also is charged with soliciting a crime against nature, police said.

This is more of a commentary on what young military couples have to do to make ends meet than it is about the sexual preferences of the Internet generation. In the old days, these videos would have been made on VHS tapes and then circulated through the Fort Bragg community by selling them at a stand outside of the PX or by trading them through the mail. Usually, this is done by the S-3 or the S-4 in the artillery battalion, or it's traded off by the battalion commander's girlfriend and her husband in the Corps logistics battalion.

Nothing should surprise you about what goes on there. Nothing.