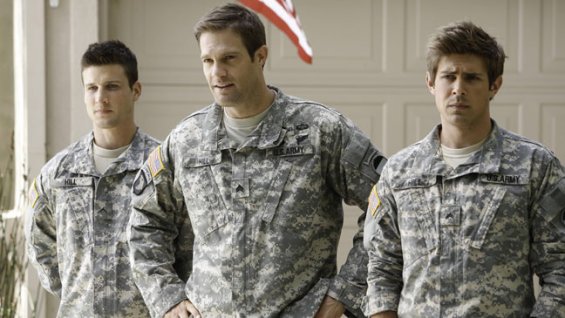 This is the actual premise of a show on Fox:

Enlisted is a military-set family comedy centering on three brothers who, when the best of the best are sent overseas, stay behind to keep the post in order. Geoff Stults, Chris Lowell and Parker Young star alongside Keith David and Angelique Cabral.

Sounds like a hoot. The problem is, this sort of a situation wouldn't actually happen and that means that the premise of the show, which is critical in any comedy, falls apart right away.

You would never see three brothers anywhere near each other unless they were on leave in the Army and you have what would appear to be three men in their thirties with what amounts to almost no rank whatsoever. The dude in the middle has a combat patch, is Airborne qualified with the Pathfinder badge, and he's a mere private? A buck sergeant, if that? Really? And the other two have too much hair and not enough rank as well.

The people who stay behind are usually non-deployable. These three able-bodied men are all brothers, serving on the same Army post, and they didn't deploy with their units? How are you going to mine that for laughs? Good luck.

These things matter even if it is just a comedy.
on September 13, 2013
Email ThisBlogThis!Share to TwitterShare to FacebookShare to Pinterest
Labels: Arts, Character, Characterization, Defense, Editorial, Humanities, Humor, Military, News, Story, Television