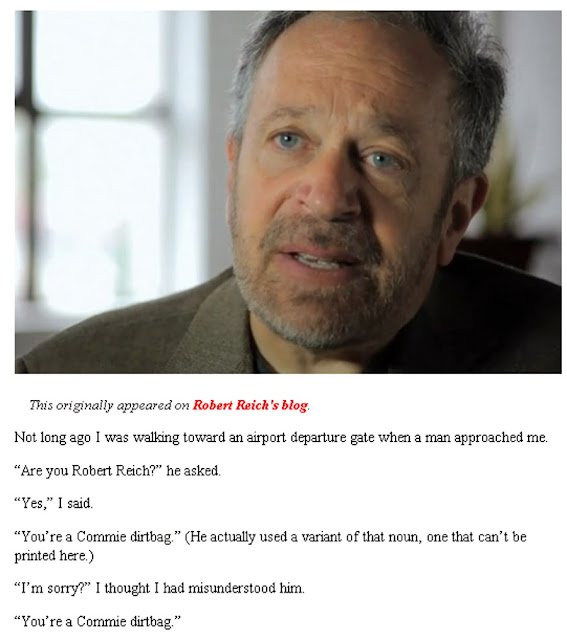 Robert Reich tells the story of being accosted by an ignorant, but well-dressed, man in an airport and I am guessing that the man called him a douchebag. In some circles, this would be worthy of an asskicking, but the former cabinet secretary took it upon himself to correct the man rather than deliver a righteous public stomping.

I don't believe we are living in extraordinary times; I just think these are worse times than the 80s, 90s and 2000s. The Internet has helped to make these bad times, but so has the collapse of the working media. We are so uninformed and ignorant that it is breathtaking. Fifty years ago, a person read newspapers and listened to the radio and received a fair amount of information. There were public service organizations and connections to community that don't really exist anymore. Virtually every large city in America once had at least two if not three newspapers and a slew of locally-operated radio stations that vied with one another to provide news and information.

Now, your newspapers have been consolidated and are barely reporting any news. Now, your radio stations run satellite programming. Now, you have Patch, whatever that is, and there is a dearth of real information. What comes out as news is nationally broadcast and sensationalized and corporatized so as not to offend.

Reich is considered a Communist solely because the people who agree with the person who used that term don't have any idea what constitutes an actual "communist." It's a hold over term used by older people to try and smear someone with an older-skewing demographic. It should be laughed at and mocked for being ignorant of history and politics. Instead, it goes out over the airwaves and lands with some unthinking fool in an airport, making Reich's day less pleasant.

This is the stupidest fucking time in American history, except for all of the other stupid fucking times. Let us not forget that nasty, ignorant discourse is a common theme in American politics. Our knowledge of what used to mean an informed comment on something has shifted over the years to include the ravings of lunatics and the desires of sponsors and the needs of network television executives who are being strangled by technological changes and an overall disinterest in knowing things.

People who want to know things find them out in spite of the media and our culture. That will never go away. What changes, over time, is how much we remember about how bad the good old days were.
on September 26, 2013