An Olive Branch in One Hand, a Knife in the Other 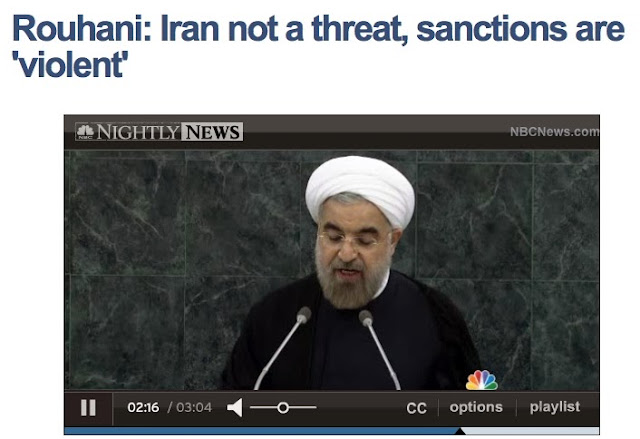 Why is the "moderate" man wearing holy garments? Why are people surprised to see the Iranian government mounting a fully developed diplomatic effort to ease the crippling sanctions against it?

Iranian President Hassan Rouhani told the United Nations General Assembly on Tuesday that his country poses "absolutely no threat to the world," and sanctions that have crippled its economy are "violent — pure and simple."

In his first address to the world body, hours after President Barack Obama spoke, Rouhani also said he is prepared to engage in "time-bound" talks to resolve the dispute over Tehran's nuclear program.

Rouhani’s closely watched visit to the United Nations followed a series of diplomatic overtures the centrist-leaning cleric has made to the West since he was elected to replace hard-liner Mahmoud Ahmadinejad, and he stressed his moderate credentials.

You can say whatever you want about Admadinejad, but he never went anywhere cloaked in anything other than a cheap suit and a lingering patina of anti-Semitism. This new version of Iranian diplomacy looks as harmless as all the other efforts. The modern media are much easier to fool, however, so this man and his Twitter account are getting more attention than necessary. The "president" of Iran has no real power or influence. He is a figurehead.