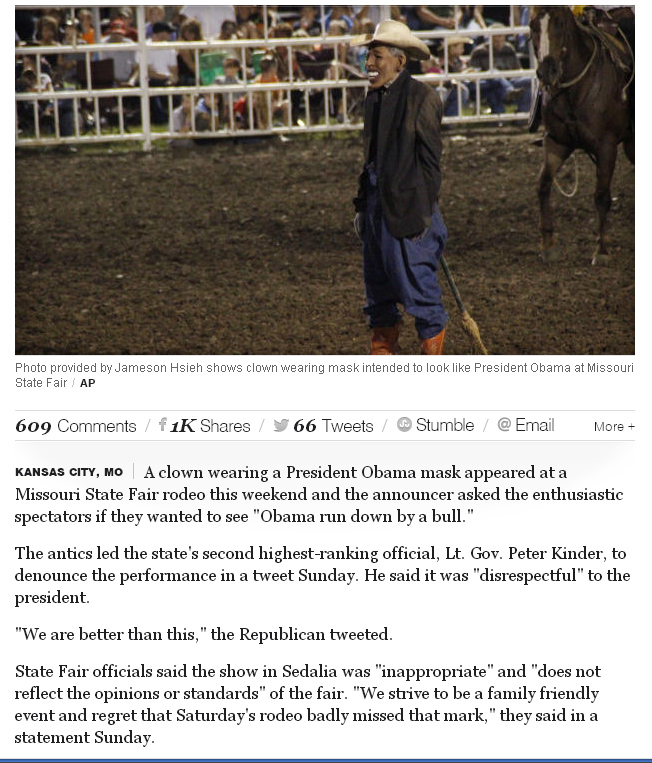 Why would anyone normal or sane care about what a bunch of yahoos at a State Fair have to think about anything? In this case, we're talking about country bumpkins slathered in gravy and sugar and walking around with their fingers in their mouths. The Missouri State Fair is where they go to celebrate agriculture, a practice subsidized by the government so that actual farmers can actually farm.. The hatred shown to the President comes with what has to be the irony of the ages--how many attendees have lived their whole lives without a single benefit check? Are there any opinion makers in the crowd? Is there anyone there who can even vote? The thing is, no one should take the State of Missouri seriously in this regard because, well, this is the state that votes for the loser or the Republican in national elections now and this is the state that can barely govern itself. Screw them.

The Republican Party has decided to go with racism and regional populism. It has decided to destroy the American government wherever it can and it isn't even opposed to the idea of telling 30 million Americans to go screw themselves. This is how they get popular--by destroying their own base.

Let the yokels laugh at the first President in modern American history to add a benefit to their lives beyond Social Security and Medicare and Medicaid (all Democratic Party issues, of course). Let them suck the teat and continue to survive into their old age because Democrats took care of American society while Republicans compared them to Communists and Terrorists and did nothing.

Welcome the hatred they demonstrate in public. They are ignorant. Pity them and continue governing in spite of the anti-American activities of the Republican Party.
on August 12, 2013