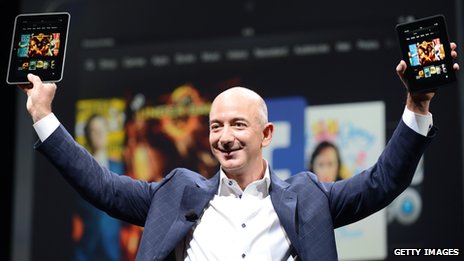 The act of buying a newspaper in order to gain access to a "content creator" is a fanciful idea:

Jeff Bezos's latest move helps expand his role as one of the most influential content creators in the United States.

The Washington Post is different though, as Mr Bezos will personally own the business outright and has said Amazon has no role in the purchase. He has written a memo to the Post's staff saying he will not lead the paper's day-to-day operations, but his note was striking for the emphasis he placed on its need to "invent" and "experiment". Business as usual is clearly not an option.

The Washington Post doesn't really create content anymore--it repurposes the content that gets yanked from the newswires and from suburban Washington D.C. and then fills a fair amount of space. People who consume the media product currently being created end up with a lot of material that wasn't actually created by the Post. Through attrition and deep cuts, the Post is yet another newspaper that slashed costs primarily by making the amount of original content created by the paper smaller and smaller year after year.
Far too many of the talented "content creators" are long gone. Remember Tony Kornheiser and Michael Wilbon? They created vast amounts of content for the Washington Post, much of is consumed at the national level. They created that content for decades and now they do it for ESPN. Bezos should have purchased the newspaper before they left, not long after.
I think that this was a vanity purchase and will serve as a mouthpiece for Amazon. They will probably create a free app or service that will help sell Kindles that will deliver the Post to Kindle users; in turn, Amazon will sell ads and then be able to claim that readership for the Post is equal to however many Kindles carry it (for free, of course). This will allow Amazon to claim that everybody is reading the Post even when they are simply carrying the wirelessly downloaded versions on each device. The Kindle, being a content curation device, needs a few free or giveaway services; look for Bezos to buy a cable channel or a package along those lines so that he can drop that content onto the devices as a further enticement. Or will he just buy a slew of dying magazines and make them Kindle only?
There won't be a hell of a lot of content, just a vastly expanded audience counted by the number of Kindles that feature the Washington Post service or app. And, thus, Bezos will claim victory over all of the other failing and fading media companies that have slashed content creation to the bone.
on August 06, 2013