The Racist Who Defended George Zimmerman 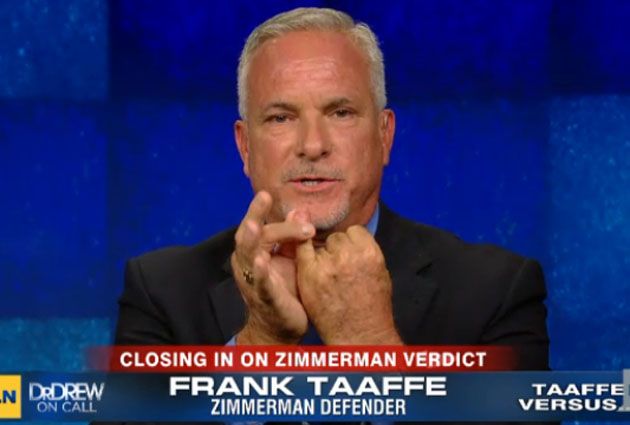 How's it going in post-racial America?

The producers for the shows that invited Frank Taaffe to appear as an expert and defend George Zimmerman in public should all be fired; there should be an accountability moment arriving for these ignorant jackasses. Taaffe makes no secret about what he is--a violent, insane racist with an agenda:

Taaffe was hardly the ideal person to be weighing in on a case suffused with racial angst—or commenting on criminal-justice matters, period. A Mother Jones investigation has found that the 56-year-old New York native has a lengthy criminal record that includes charges of domestic violence and burglary, and a history of airing virulently racist views. Just last Sunday, he appeared on The White Voice, a weekly podcast hosted by a man named Joe Adams, who has deep, long-standing ties to white-power groups and has authored a manual called Save The White People Handbook. (Sample quote: "A mutt makes a great pet and a mulatto makes a great slave.")

During a previous White Voice appearance, on July 27, Taaffe argued that whites and blacks have no business mingling. ("They don't want to be with us and we don't want to be with them.") Taaffe also opined that if Zimmerman had racially profiled Martin, he was justified in doing so because "young black males" had burglarized homes in their neighborhood. "What if I—a middle-aged white man—wore a hoodie and went through Trayvon Martin's neighborhood?" he asked defiantly. Adams replied that "no sane white person" would dare walk down their "local Marcus Garvey Boulevard."

"I'd only be there for one or two things," Taaffe shot back. "And I'm sure the vice squad would want to be interested in that."

Later, Taaffe accused African Americans of committing "self-genocide" by failing to address the "ills and diseases that are festering" in the black community—especially the absence of black fathers, which "leaves young black males growing up without direction." And he bemoaned the fact that some white women choose to date black men, saying that they invariably end up becoming single mothers. "Guess who winds up paying the tab on that? You and me and the rest of America," Taaffe grumbled. "It's called entitlement, man. It's called food stamps. It's called welfare."

Where are the gatekeepers?

Frank Taaffe says what a lot of people think and, for that, we should celebrate him as a reason to slap down anyone who claims that racism is a thing of the past. It is not. It is here and it is real.
on August 08, 2013