The Blessing of Phony Outrage 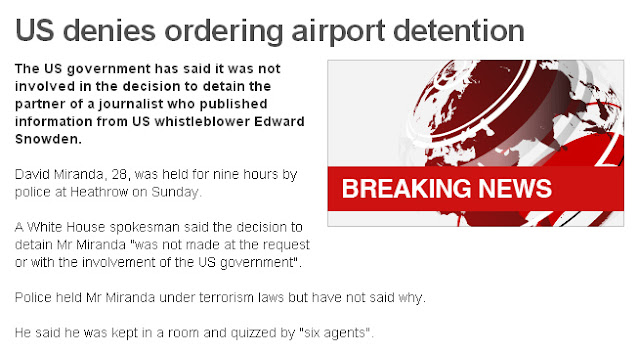 I'm sorry, but you've been trolled.

If you believe what happened in Great Britain over the weekend, the British detained the partner of Glenn Greenwald because Glenn Greenwald told everyone that his partner was going to carry classified information stolen from the United States from Germany to Brazil by way of a stop at Heathrow Airport.

The United States government cannot order the British to do anything. They do cooperate with one another; Greenwald's partner was held and questioned. His electronics were confiscated.

This has created a massive public relations victory for Greenwald.

However, consider this. No one was arrested. No one was given an extraordinary rendition. No one was put in a temporary facility and made to disappear. No one was tortured. No one was subjected to any violence, other than the removal of some gaming equipment. No one was executed or beheaded in a public setting. For all of the evil that America is supposed to be responsible for, very little of it has actually appeared before our eyes.

What, if anything, did the British get?

Probably nothing. Because this was all staged for the benefit of the enrichment of Glenn Greenwald.

This is what Greenwald intended all along--to take Edward Snowden's windfall and be someone that the world cannot ignore. Now he's making threats against the British and the American governments. How does this translate into enlightening people about civil liberties? How does the bluster and the promise of damaging these entities translate into informing the public? It does translate into making the story about Greenwald and very little else. Because when you stage incidents like this and whip up anger, you are trolling people because you have created a phony premise. When you count on phony outrage, you are engaging in the same sort of tactics that have served liars and lying governments well. At some point, maybe we'll have that discussion about privacy and civil liberties.

Until then, ignore the marketing schemes that are designed to get people angry about things that have been ginned up to gain hits and favorable donations.

I'm sorry, but when Andrew Sullivan is wholeheartedly on board with something, I get a little leery of being there as well.
on August 19, 2013