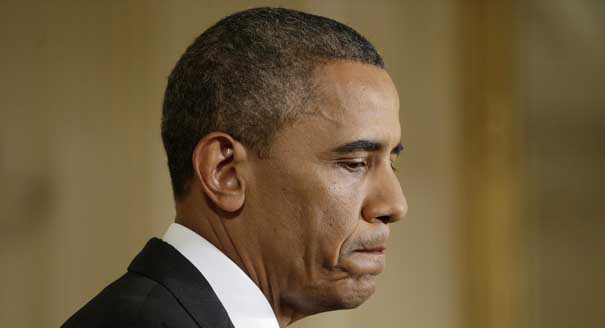 This is a great example of what a terrible news organization can do with the facts:

The president and administration aides make a familiar argument that this is due to political obstructionism: look at how many nominees the Senate has sat on, they say, and Republicans’ unprecedented number of questions on so many previously untouched topics that have forced them into extensive and necessarily extended vetting.
But the president’s taking his time, too.

More than six months into his second term, Obama has left top positions throughout his administration vacant, or filled by acting officials. In many cases, he hasn’t even nominated people for the jobs.

That has left unfilled dozens of high-level jobs at key departments that require nomination and confirmation. Even with the expected turnover of a second-term administration, that’s extremely high. And at Homeland Security — where Obama has already waited more than a month to nominate a successor to Napolitano and Republicans have already signaled a fight over her successor — and other agencies, that’s where things are stuck.

Things are stuck because the Senate will not confirm nominees. And that is because the Republican Party has decided to destroy the American system of government and take unprecedented steps to ensure that the function of government grinds to a halt. Without the oversight and accountability, and the talent, of actual nominees running things, there is a greater chance for government scandals when harried, temporary leaders make mistakes and run afoul of the oversight of Congress.
Politico does not want to take the necessary step forward and say this out loud--because the Republicans have, for the last five years, refused to govern and confirm nominees, no one wants to be nominated or serve in the Obama Administration. They have driven people out of the process.
There is no "both sides do it" story when you look at what has happened; the Republicans hate government and want it to fail. They want to keep people from serving and they are destroying the confirmation process, recent rebellions notwithstanding.
on August 14, 2013