Everyone is Stealing From Roger Farmer 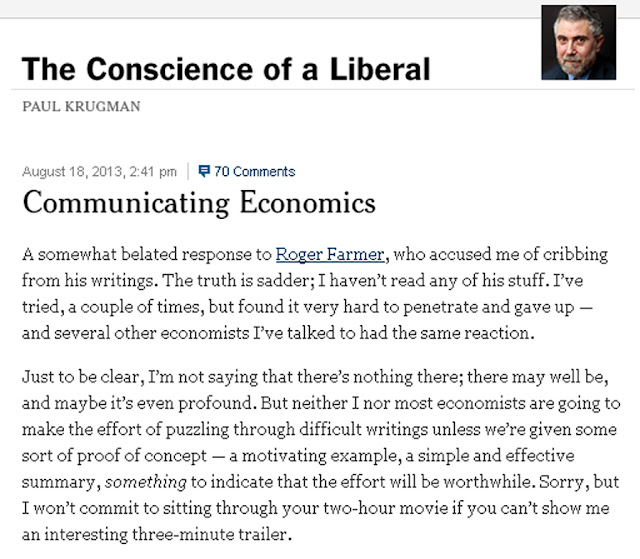 Roger Farmer is an award-winning economist who thinks Paul Krugman is ripping him off. Professor "K-thug" Krugman claims that Farmer's work is dense.

In response to Krugman's denial, Farmer posted several articles and papers that he believes will prove Krugman wrong.

These are the first two paragraphs of one of those papers.

Six years after the onset of the Great Recession, Western economies are still underperforming by historical standards. There have been calls from prominent academics, politicians and policy makers for a rethink of the foundations of macroeconomics. But what would that mean? This article explains how a radical restructuring of macroeconomic theory, based on models of multiple equilibria, can help us to understand the crisis.

To make my case, I summarize and synthesize results from my recent books and academic articles. This body of work (Farmer 2002, 2006, 2008, 2010a,b 2012a, 2013a, 2014) reconciles Keynesian and classical ideas in a new way. Instead of assuming prices are sticky, I develop a new paradigm to explain why high unemployment persists.

Game, set, match to Roger Farmer, bitches. Equilibria for thee but not for me.
on August 20, 2013