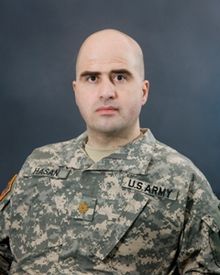 The important thing here is that this man is no longer a Major in the United States Army. He is a death row prisoner:

The Fort Hood gunman, former Army Maj. Nidal Hasan, was sentenced to death Wednesday for killing 13 people, most of them unarmed soldiers, in a 2009 shooting rampage.

The jury of 13 retired military officers, which convicted Hasan of 45 counts of premeditated murder and attempted premeditated murder, deliberated for just over two hours on the sentence. They also dismissed Hasan from the Army and stripped him of his military pay.

Hasan will now be flown to the maximum security U.S. military prison at Fort Leavenworth, Kansas, where he will be placed on death row while awaiting lengthy, automatic appeals.

I think that his appeal process will focus on the fact that his lawyers were prevented from defending him while he behaved, in legalspeak, as a "shithead" the whole time. The wrangling over his beard and what to do with his massive amount of backpay as a Major is going to tie up the military courts for a while as well.

This case has set some precedents that will affect military justice for a good long while.