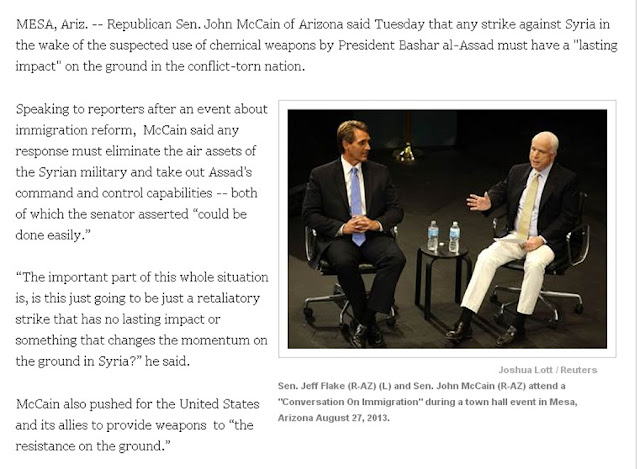 Senator John McCain (R., War) has a serious case of delusion and dementia on his hands. His loved ones need to get him some help.

Syria does not have an air defense system or a command and control system that can be taken out "easily" by any stretch of the imagination. Syria has been aided by the Russians in developing an air defense system that can protect itself against Israel and thus, by extension, the United States. This is true because we have armed Israel for as long as Syria has been taking Russian help to defend itself. This is the Cold War standoff that never really happened.

Syria is not worth a single American plane or life. It is not vital to any of our interests. We should not be going to war there.If we push over the Assad regime, we are simply handing anti-American terrorists a chance at becoming the new Taliban.

If Syria were a pushover, Israel would have destroyed it long ago. And while Syria is not invincible or strong, and could not sustain itself for very long against American airstrikes, it has planned and prepared for such a thing for decades. The Syrian partnership with Russia is not a game changer or a winner but it makes them capable of inflicting losses.

Right now, I highly doubt if the American people are prepared for a war or for a conflict that costs us planes and American lives. Cruise missiles would have to be backed with manned air attacks, no matter what people like McCain think they know.

The story linked to above was written by Luke Russert, the new media courtier to the likes of McCain, who represents the use of America's military as a constantly swinging hammer, desperately seeking out another nail to hit. If McCain were president, we'd be suffering through our ninth war right now with no end in sight.
on August 27, 2013