Craig Calcaterra is Too Stupid to Write About Baseball 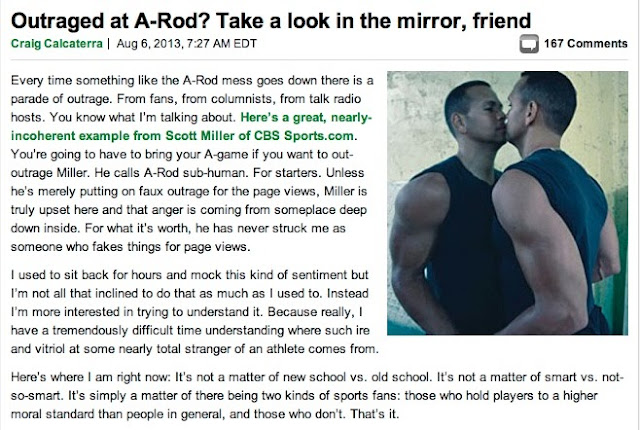 Someone named Craig Calcaterra is a laid back sort of bro, my friends. He's cool with all the things that go down and you should just chill if you don't like something or whatever. I don't know. Does anybody know?

Here's what Calcaterra does not understand about sports and about baseball in particular--America admires cheaters; we love it when NASCAR drivers cheat. We love it when a football player cheats and gets his team a win (only when it's our team, of course). And nobody hates Alex Rodriguez because he tried to slap a ball out of someone's glove.

No, they hate Rodriguez because he took a quarter of a billion dollars to play baseball and he was too stupid to get away with what little performance enhancing he attempted to do in order to prolong his career so he could break the career home run total set by Barry Bonds. Had Rodriguez been able to solve his health problems, and extend his career past his 43rd birthday, he would have had a pretty good shot at getting the record.

Now, he won't. And that's why people hate him--he pissed away a chance to do something exciting and historic. He cheated people out of a reason to believe in his abilities. They hate him because he brought some weak-assed excuse and got caught cheating after he got caught cheating the first time. In other words, he broke the first rule of cheating: once you get caught, don't be a jackass and try that shit again.

Chillax, I guess, or don't. But Craig Calcaterra is just too stupid to write about baseball.