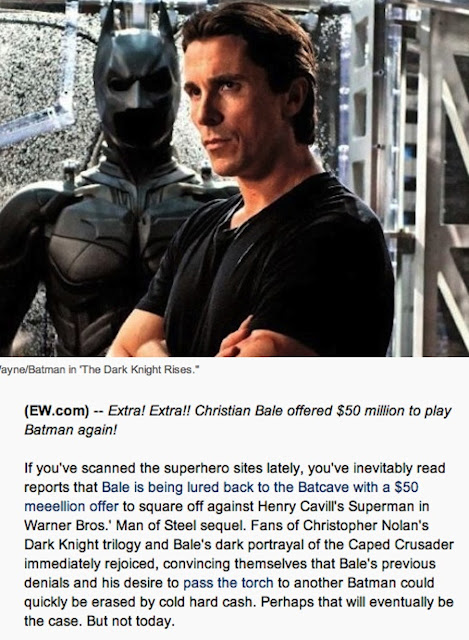 Honestly, I don't see this happening. Christian Bale is all about artistic integrity and the craft of acting. He would rather be the next Daniel Day-Lewis than the next Mel Gibson.

If you think about what drives American actors (money) and British actors (art that makes money), it's easy to come away with an understanding of what matters most to Bale. He would rather be the guy who turned down $50 million than the guy who took $50 million and made a film that would not earn him an Academy Award nomination. He would rather look good spurning the system than wrapping himself in it.

What's he got to prove? Nothing. And so that might make him do it--I could definitely be wrong. But I suspect that he will embrace the idea of telling Hollywood to politely transfer the part to someone else.

Go read the article, though. It is more of a fanboy's wet dream and a blockbuster movie inside baseball fantasy than anything you'll read this month. Whoever wrote it needs to wash their hands and throw away all of their underwear.
on August 16, 2013