Bradley Manning Got Off Easy 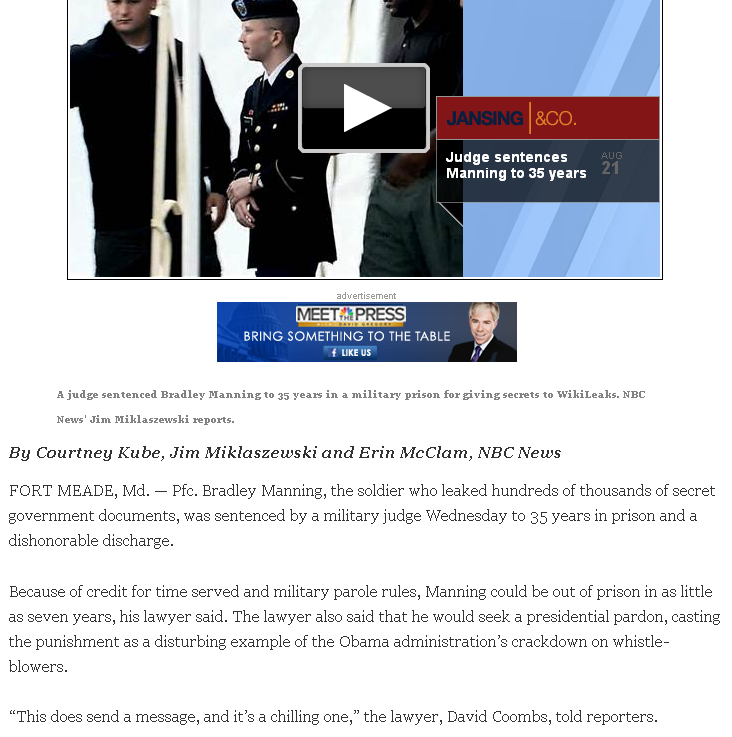 I had predicted that Bradley Manning would get about 12 years in prison and, given the fact that he will probably get out in less than that, all is well and good. Given how overcrowded prisons are, he could get out in six years, easily. He should not be pardoned; that would not be justice.

The message being sent to future leakers and whistleblowers is not chilling by any stretch of the imagination; those who want to be someone, rather than do something, are going to take heart from this display of leniency and they will violate their oaths and ignore the agreements they have signed with the government.

I have never felt more out of step with people who exist on the left side of American politics. I view Manning and Edward Snowden as ridiculous narcissists who shouldn't be held up for anything other than ridicule. I don't even bother writing about Snowden because, well, nobody really cares about the cases they are involved with, other than to use phony outrage to ignore the reality of defending this country. I, personally, think that the government should remind people that terrorism can't be stopped or defeated; it can only be pushed back and thwarted. How far we want to go in order to do that requires sophisticated applications of politics. Modern American politics are too "dumbed down" for this to be effective.

The Army should have relieved his entire chain of command. He demonstrated an inability to serve as an intelligence analyst and he should have stayed at Fort Drum. If they had simply yanked his clearance and processed him out of the military, all of this nonsense could have been avoided. This is the direct result of a permanent state of war and ridiculously low standards. How did Manning ever make it out of Fort Huachuca? That's what I don't understand.
on August 21, 2013