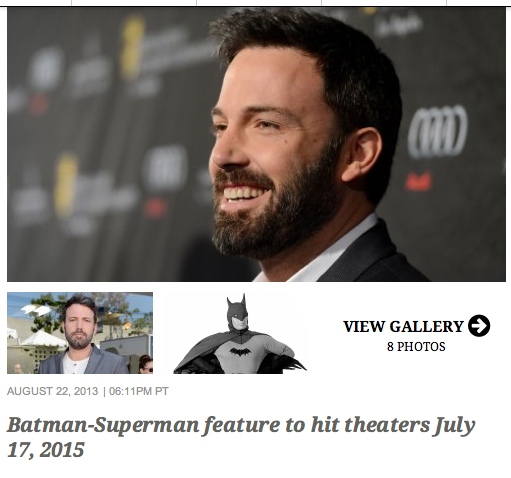 This is a terrible turn of events for anyone who cares about the legacy of the Batman character. Ben Affleck is a poor man's Batman; he is a celebrity actor who will probably ruin the franchise for a generation.

Christian Bale was Batman; he took the role away from everyone and made himself the character by turning in three exhaustively researched and emotionally draining performances. He survived being upstaged by Heath Ledger; in none of the other films was anyone anywhere near as good as he was in terms of being able to flesh out the role and make it his own. This is why Katie Holmes was so easy to replace and why Tom Hardy was wise to wear the Bane mask.

I didn't think Bale would do it for the money and that turned out to be the case. He looked at the payday, looked at what he had accomplished, and went on with his life. This one, single act of artistic integrity makes him the character of Batman. For fucking ever.

Affleck doesn't care about anything other than getting to spend time away from his nagging wife; a franchise-worthy action film puts a nice placeholder on his calendar. It won't make him anything other than the target of fanboy antipathy.
on August 22, 2013