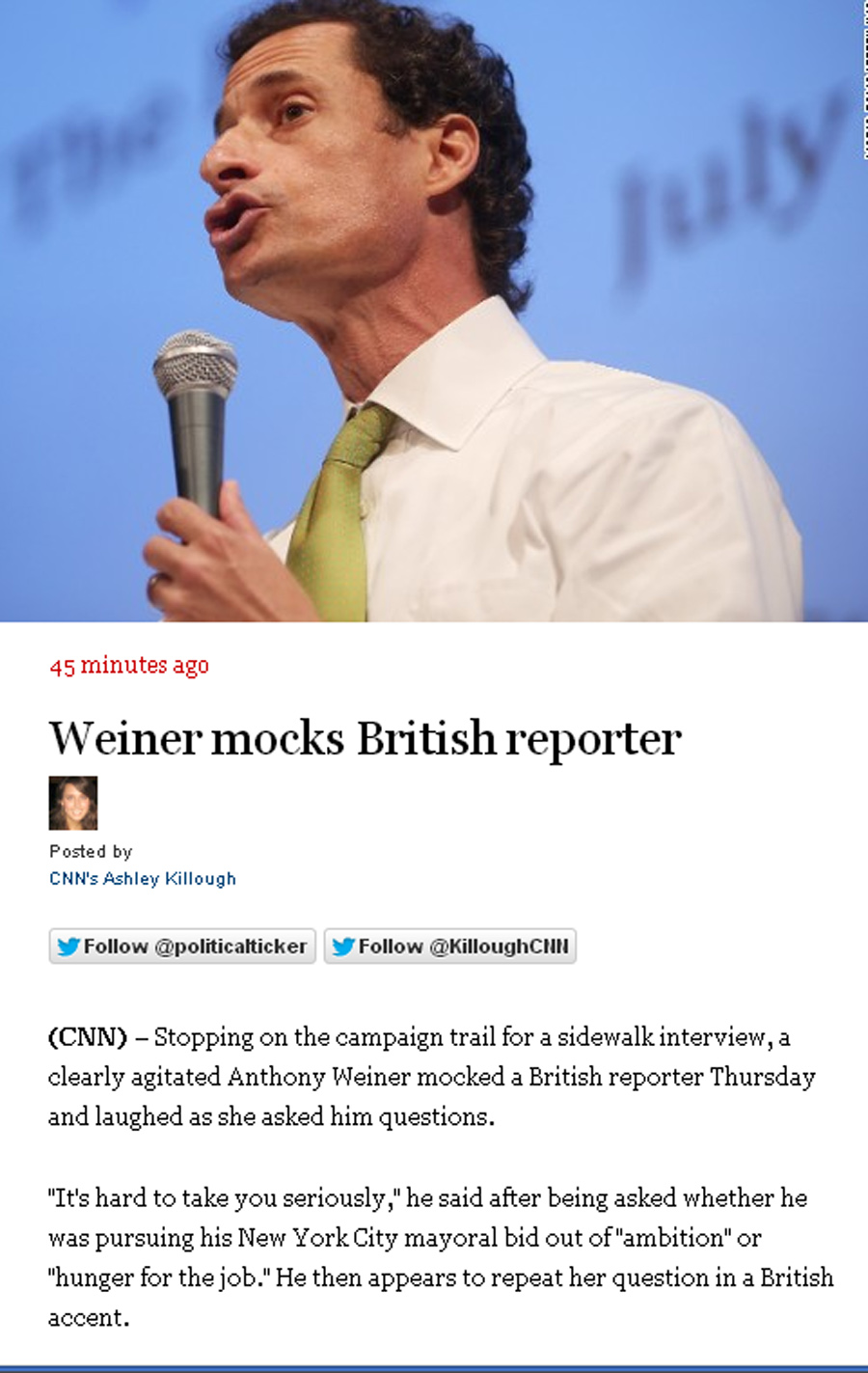 If Anthony Weiner wants to act like a dick in public, let him.

The thing is, this is a bad choice for a politician to make unless your name is Chris Christie. And what Weiner is trying to do is very much what built up the myth of Christie as a tough guy. Is Weiner trying to transform himself into a New York City kind of Christie? Or is he just being a dick?

If you parse the reporter's question, it is an uncomfortable analysis of how empty Weiner's bid for mayor really is. He is not running because he knows what to do; he's running because he has nothing else happening in his life and craves the power and the attention. Once he gets power and attention, he tends to channel his energies into sexting and carrying on a vivid adult fantasy life. Which is fine if you're in the private sector. In politics, no. You have to accept that there's a fake and fraudulent world out there that calls for piousness when you may, in fact, never encounter a truly pious person out there.

Weiner wants to put on a suit that he can't possibly wear for more than a few hours a day. His comfort zone leads to crotch shots and thumbing his way through scads of naughty chatter with strangers. He is a 21st Century perv with no need for lubrication or latex because all of his deviancy is normalized on a gadget. He's probably the most normal person there is--he expresses what he wants without actually going and getting it. He gets it out of his system in a way that harms no one. And that's okay--it really is. His wife seems to be okay with it. But this lifestyle does not work for a politician.

Chris Christie's career is based on dickish behavior backed with being morally certain about his positions. Weiner, unfortunately, is not a leader or a legislator of significance. The standards that are applied to him are hypocritical, of course, but we rarely hold an accountability moment for hypocrites anymore because that behavior is just as normalized as the mighty dick shot. Weiner doesn't have the talent to transcend his flaws. He's merely a bomb-thrower when it comes to politics and he attracts attention to himself by beating up on others. In order to do that, you have to have something going on--some measure of moral superiority that can give your arguments legitimacy.