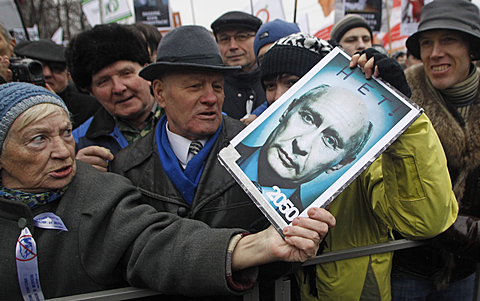 It didn't take long for bigots in America to find something about Russia that they could wrap their arms around and fall in love with. Anti-gay laws in Russia are a family wingnut's best hope for gaining a little attention on the Internet:

Bryan Fischer loves the Russian way of doing things. It is patently anti-humanistic, it is rooted in age-old hatreds, and it has nothing to do with reality or the future. This is a religious fanatic having an orgasm over the Godless Soviet holdovers and their despicable ideas. Russia is well and truly screwed at this point. It is in the midst of a whirlwind of condemnation. These actions, should they lead to actual economic sanctions and penalties, could cripple what little there is of a Russian economy. Russia, in turn, might well stop natural gas from flowing to Europe this winter--look for that to happen.

Demographically, Russia faces a dwindling population. The crackdown on homosexuality is a ham-fisted Soviet-style attempt to get people to have babies. About all Russia can produce right now are drunks, and a generation of children who are afflicted with fetal alcohol syndrome. It is an absolute embarrassment to Russian society to single out homosexuals for anything remotely resembling the kinds of persecution experienced by Jews and so-called Gypsies and any other minority population.

Blame for all of this lies with the people who enable Vladimir Putin. How many dictators does Russia need?