Zimmerman Gets Away With It 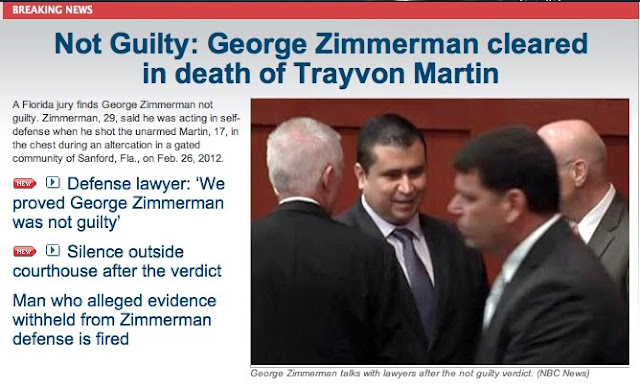 George Zimmerman got away with it today. The rest of his life will be spent doing what, exactly? Being a violent wannabe cop? Breaking the law again and again (because, up until now, Zimmerman has broken numerous laws)? Shooting some more black kids?

The rule of law marches on. In Texas, you can kill a prostitute when she won't have sex with you. In Florida, you can kill someone who decided to walk through your neighborhood carrying snacks. The kind of law they practice down in those two big southern states, where tens of millions of Americans live, is a sham and a fraud. If you choose to live in those states, you should remember one thing--the law means nothing. It is kill or be killed in those places and you might as well buy a third and fourth gun and double down on the terror.

Human life means nothing when everyone is a shooter in a shooting gallery puffed up with fear and madness.
on July 13, 2013