The Anglicization of German 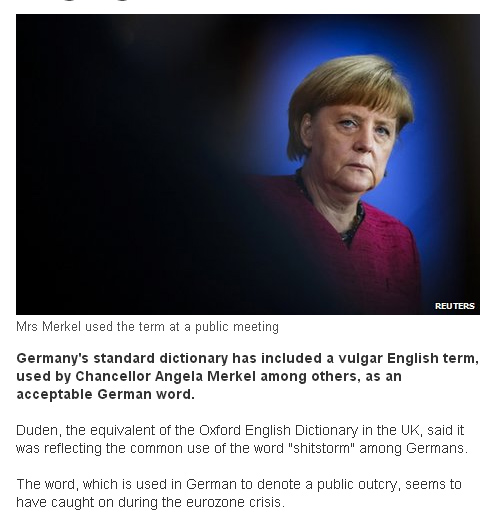 While this may sound like a naughty post, it really isn't about cussing. It's about how the language evolves all around us, but in a way that is barely noticeable.

The German language already has a version of shitstorm that is somewhat similar--scheissesturm would be the loose approximation or translation, and that doesn't sound much different than the English version. It's probably easier to adopt an English word than invent a new German phrase at this point, however.If you didn't grow up with this term--and I truly believe that the expletives you learn as a child are the ones you're going to adopt as an adult--you're not going to use it.

"Shitstorm" is a word I remember hearing on an old Midnight Oil record from the late 1970s or early 1980s. I remember the term was used in exactly the same way as it was in German, as in, 'there's a shitstorm coming,' and so I wonder how much use it receives in Australia.

How it spread, gradually, is through usage and utility. Someone had to have adopted it as a favorite saying or description and then the power of how they used it must have influenced someone else.
on July 02, 2013