Richard Cohen Wins the Race to the Bottom 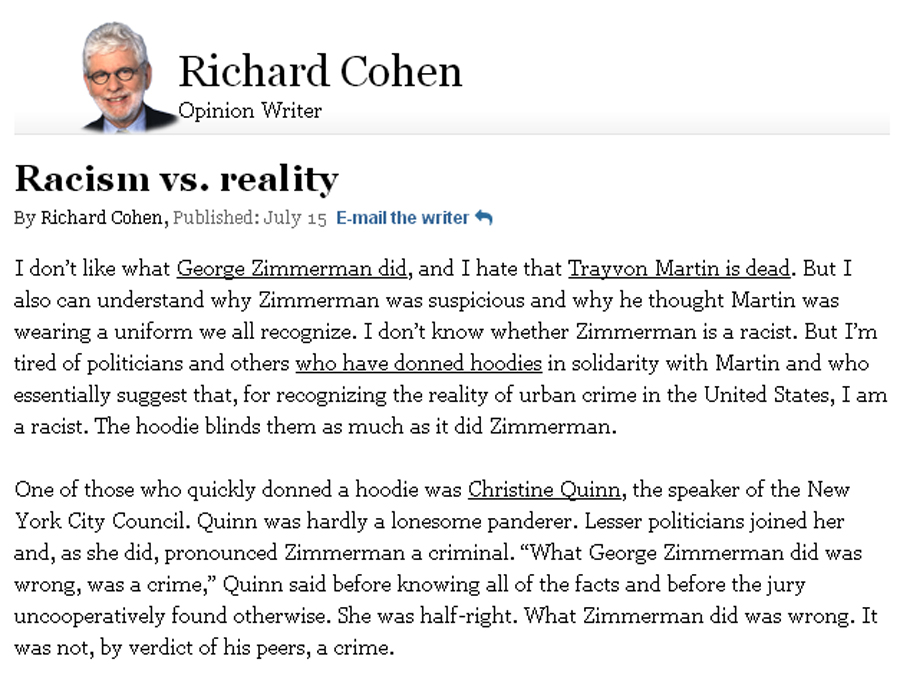 Richard Cohen is desperately trying to be the stupidest man on the Internet. He's got a lot of competition, but he's never going to give up. This is what people from his generation do--they use their cushy media gigs to perpetrate the inner rage they feel about being irrelevant and out of touch with the culture.

Cohen thinks it was about the hoodie. It was not about the hoodie. It was a deeper and more complex issue called racism and Cohen cannot get past the fashion aspect of why George Zimmerman decided to appoint himself the leader of the pack and start following and shooting people who made the mistake of lawfully walking through his neighborhood while armed only with snacks.

Cohen wants to talk about the hoodie because that is something Martin chose to wear. It allows Cohen to reinforce his own racist beliefs because, if it's about the hoodie, then it isn't about the fact that Martin was a black kid who didn't deserve to be gunned down by a wannabe cop. If you're unable to separate the hoodie from the boy, then you're not following along. This was about racism and guns and really, really bad laws in Florida. It was not about sartorial choices.

And he especially wants to talk about the hoodie because that is how he links this crime to the urban crime of Washington D.C. Well, guess what? The population of Sanford, Florida is less than 55,000. There is no comparison--this was not an urban crime, not by a long shot. This was not what Cohen wants it to be, no matter what.

We already know that Trayvon Martin was tried and convicted for his own murder; now we get to hear an aging, pathetic old leftover from the 1960s opine about modern fashion choices. For someone of Cohen's generation to misunderstand the racial aspects of what happened is proof that he lost the plot long ago. It wasn't about what the kid was wearing. It was about the color of his skin.

I just want to hear one person get it--Martin was convicted of being black and thus deserved to die at the hands of a man who had no business making himself the arbiter of who should be where doing what where he lived. They used racially coded aspects of this young man's life to convict him of being where George Zimmerman thought it would be a good idea to skulk around with a gun and a head full of misguided ideas about public safety.

You would think Cohen would know what race, guns, and our society have been about for the last however many years he has been in the public arena as a part of the media. You would think that, but you would be wrong. Cohen is sad and pathetic yet again and completely out of touch.