Over Before It Started 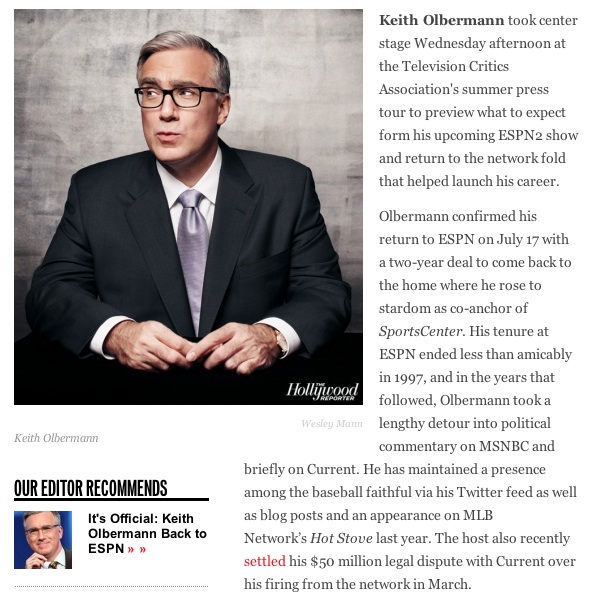 Somewhere, an ESPN executive is screaming into his sleeve:

"There's no such clause that said I could not talk about politics, there is no such clause referring to content about anything that we might do on the show," he said, refuting a recent New York Timesreport that claimed politics would be off-limits on the upcoming sports series. "There were also references to having pop culture segments and such, that was also inaccurate. I don't know where it came from; we tried to correct it as it happened. It's not the biggest mistake in the world but it's led to a bunch of questions of: How could you not talk about politics? I'm not intending to talk about politics, certainly not in the partisan sense and not in the sense that I did in the last 10 years of work that I've done, for the simple reason in that it's a sports show."

This is how it begins. Keith Olbermann, who is a great broadcaster and deserves great success, is going to start changing the parameters of what he agreed to because, well, he uses his power to achieve an advantage over his employer. This accelerates the firing process; it is well nigh possible that Olbermann will be fired BEFORE he even gets on the air.

I think he should go to CNN and do what he does and be left alone to do that. But, what the hell, right? This is going to be enjoyable to watch. Anything that causes ESPN pain is a good thing.