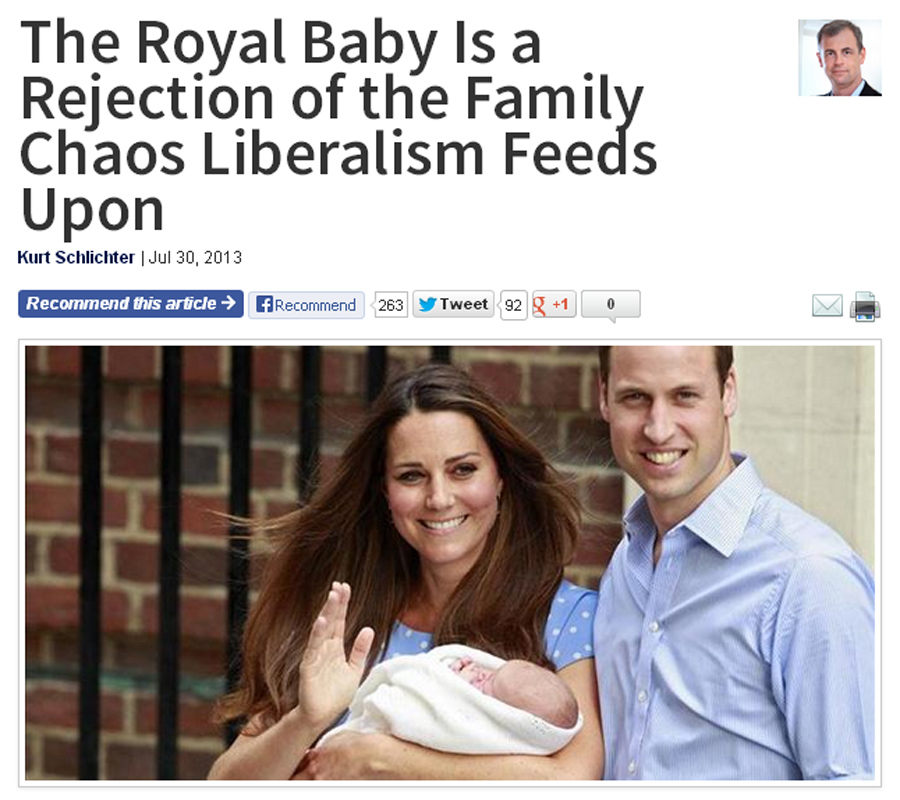 Sure, the royal couple gets paid out of the British treasury, but it isn’t as if Prince William sits around being fanned and fed grapes. Besides cutting ribbons and promoting charities, he is a warrior who has proved his courage by seeking service on battlefields he could have easily avoided. Royalty is a bizarre concept, but he does work for a living.

By contributing to society, Prince William repudiates the basic premise of liberalism. If you vote for liberals they will redistribute free stuff to you from the people who contribute to society. This will allow you to wallow in the cesspit of social pathologies that led you to expect handouts in the first place, and thereby guarantee another generation of liberal constituents.

Liberalism depends on people continuing to do the things that ensure they will be poor. The most obvious among these bad decisions is to have kids out of wedlock. Yeah, we all know the single mom who is prospering or the gay couple with a great kid. That’s awesome, but it’s an anecdotal irrelevancy. The simple, unarguable fact is that the epidemic of broken families means a broken society, and liberalism feeds off the wreckage.

You gotta love it when a conservative praises the British Royal Family's work ethic, which consists of making public appearances and sucking up vast amounts of taxpayer dollars. If ever there was a welfare queen, it would be Elizabeth II.
Our Townhall friends think that the royals are paragons of virtue. How many royal divorces are we going to have to bring up? Charles and Andrew are just two examples of infidelity, scandal, and failure.
Oh, and then there's this. The only reason why this group of "royals" is running things can be traced back to a specific moment in history. That was the moment that Edward VIII abdicated his throne and handed everything over to the namesake of the latest royal birth, Prince George. The father of Queen Elizabeth II was George VI, who would never have been king were it not for the fact that his elder brother preferred the company of an American divorcee. How's that for family values?
Here's another thing to remember, by the way:

A Census Bureau analysis published yesterday has picked up some attention on among a certain (read: liberal) segment of the Internet. According to the latest figures from 2009, married couples in conservative states tend to divorce at higher rates than more liberal ones. To make a hard figure out of it: of the 20 states with the highest divorce rates, 14 voted for John McCain in 2008. The states where people call it quits the most frequently are Arkansas, Maine, Oklahoma, Alabama, Kentucky, and Alaska.

The Associated Press picked up on the red states' tendencies for higher divorce rates, quoting a sociology professor as saying, "Surprisingly, the South and West, which we think of as more socially conservative, have higher rates of divorce than does the supposedly liberal East ... The reason is that young adults in the South and West tend to have less education and marry earlier, both of which lead to a higher risk of divorce." Left-leaning AlterNet notes the irony that the social conservatism touted by politicians there don't make marriages last: "in many states where politicians claim that their constituents are the most family values oriented 'real Americans' who are afraid of the sanctity of marriage being trampled by the gays, the divorce rates are actually higher." Jezebel plays off of that theme by offering an alternation explanation to the red-blue divorce divide: gay marriage. It writes: "of the four states with the lowest divorce rates, three allow gay marriage. So maybe the gays aren't destroying the traditional family after all?" (Really, it's of the four states or districts--namely, New Jersey, D.C., New York, and Connecticut--with the lowest divorce rates.)

Townhall is dedicated to the spreading of hate and lies about liberals. This is how far they are willing to go--they'll ignore history, cite the royal family of England, and conveniently forget the fact that family values are much stronger in "liberal" households. And Mr. Schlichter knows this.
on July 31, 2013