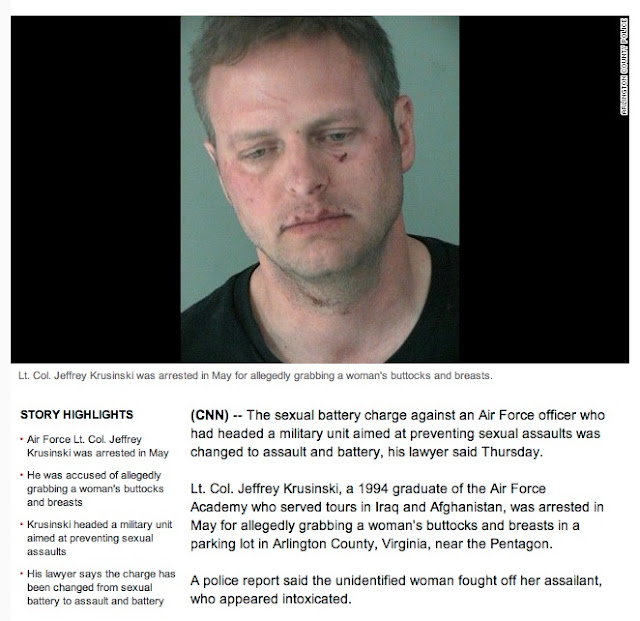 Lieutenant Colonel Jeffrey Krusinski dodged a bullet. Because of this, he becomes the face of a severe problem--sexual assault in the military.

It makes me wonder if this isn't a deliberate effort to create a separation in military law between military-related offenses and offenses that are civil/criminal in nature. In such a case, the military could discharge the service member so that they could be charged under civilian laws and wash their hands of these people.

I would support such a thing. It would quickly deny these people benefits (unless they are found innocent in civilian court, they cannot return to the military) and it would alleviate a lot of stress on the UCMJ system, which is severely burdened right now with criminal cases.
This man has no business continuing to be paid while serving in the military. He should be discharged and handed over to the civilian court system. The military cannot be trusted to handle these cases anymore. The act of grabbing a woman in a violent matter is sexual assault, plain and simple, and by not charging him properly, he will walk away without being registered as a sex offender.

It does look like she kicked his ass, though. I hope she did. I hope she finds justice in all of this and finds some peace of mind. This man is not fit to wear any uniform.
on July 19, 2013