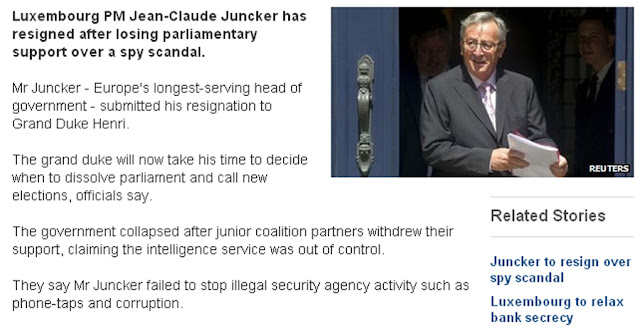 In the heart of Western Europe, the wealthy and sophisticated country of Luxembourg has revealed itself to be no better than any of the other countries in the world:

The political crisis unfolded after a parliamentary review into allegations of misconduct by the country's SREL security agency.

They included claims of illegal bugging of politicians, the purchase of cars for private use and payments in exchange for access to local officials.

The review concluded that "the prime minister, as head of the intelligence service, not only had no control over his service but also too often omitted to inform the parliamentary control committee or the judiciary of its irregularities, aberrations and illegalities".

This is why people who support Edward Snowden have it bass-ackwards. There is always a reckoning when the state abuses its power in a country where the rule of law is active and functioning. In America, and in any country where the law still exists, we need whistleblowers who actually blow the whistle on lawbreaking, not on state-sanctioned surveillance. We need people who want to do something rather than be somebody.
The problem is, stories like this will not shake the faith of people who believe that all of the evil in the world is entirely the fault of America.
on July 11, 2013