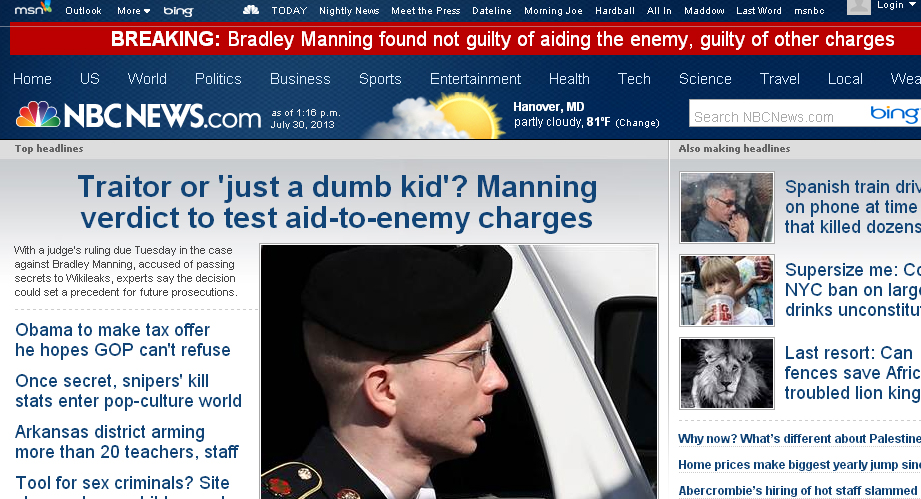 Bradley Manning almost got away with it. 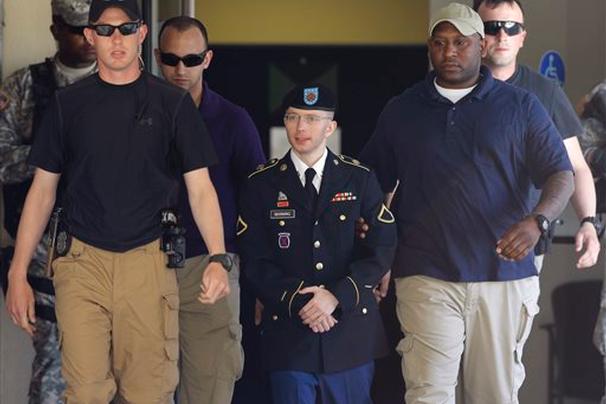 I find this to be a rather hilarious photo. I had no idea Manning was so small. He is a poster child for the "let everyone in" mentality of the mid-2000s when standards were dropped for military entry. This young man is barely five feet tall. Wow.

By finding him not guilty of aiding our enemies, the judge in this case has handed everyone wearing the uniform a slap in the face. Manning passed classified information to an organization called Wikileaks, which, most emphatically, is a definite enemy of the United States of America. I didn't buy the example given by the government--that this same information showed up on a computer in the UBL compound is a stretch of the imagination. I think the case could be made that Wikileaks, and Manning in particular, believe the United States to be the source of all of the evil in the world. This is the watered-down Chomsky view which Edward Snowden believes in as well.

Wikileaks is an organization without any moral compass or affiliation to anything resembling an idea of how society works.. It is an irrational non-state player that thrives on chaos and destruction, which is carried out by asking people to betray governments. It hides behind "the good that it does" when it gets information that exposes the abusive or illegal behavior of a country; this allows it to publish anything and everything without regard to who it damages. If every nation/state in the world is violent, corrupt, and should be brought down, we are living next door to anarchy. Who wants that?

It has basically asked anyone and everyone to help to do serious damage to the United States. This is where I am always on the wrong side of the issue--I am a shameless believer in the right of the United States to protect itself from other nation/states and from irrational non-state entities. Wikileaks was formed in order to set the world on fire. It is not a "truth" or a public advocacy group, such as Greenpeace or Amnesty International. It is a for-profit attempt to make Julian Assange a celebrity by attacking nation-states around the world, especially the United States. Manning handed Assange enough information to attain a great deal of credibility.

Manning's place as a "hero" to the left and as a patriot is cemented now, and there's nothing I can say to change anyone's mind about that fact. He's a celebrity now. He's the continuation of the "be someone" rather than "do something" attitude espoused by Edward Snowden, et al. He faces a lengthy jail term but he got away with aiding enemies of the United States. I guess we have no more enemies.

Typically, patriots stand up to their government or to tyranny and expose wrongdoing. They don't deliver protected materials to our enemies so they can attack us; if anything they give that stuff to, you know, other Americans so that the government can be held accountable. Manning exposed low-level diplomatic traffic that slightly hindered our ability to deal with other nation/states with a certain level of diplomatic credibility. He did minimal damage; the result of his damage caused the Department of Defense to have to close numerous holes in who it allows to have access to secrets. This gap was not closed in time to prevent an Edward Snowden. Both individuals have severely damaged America because of the changes that have had to be made to safeguard classified information from serious disclosure. Both handed their materials over to anti-American entities operating outside of the United States. If they had handed their stuff directly to the New York Times or NBC News, we would be having a vastly different conversation.

Untold amounts of money and vast quantities of effort--tens of thousands of man hours--will have to be dedicated to reorganizing and restructuring our defenses against unauthorized disclosures and exploitation. All of this effort would be better directed at actually protecting the United States. That's what gets lost on a day like today--the extra money and effort that will be have to spent repairing what a Manning or a Snowden have done in order to make Julian Assange or Vladimir Putin richer is not much noticed by anyone.

If Manning had had simply once NCO who was worth a damn in his chain of command, he would have been eased out of military service before he could do any damage. I say, let Manning go and find the NCOs who failed to do their jobs and put them out of the Army.

Having worn the uniform, let me tell you one thing--Manning is no hero. Never has been, never will be. He should get about 12 years in prison. He won't learn anything from his detention and the United States has no reason to give him anything harsher than that if he is not guilty of aiding our enemies.
on July 30, 2013