Anthony Weiner Didn't Do Anything Illegal 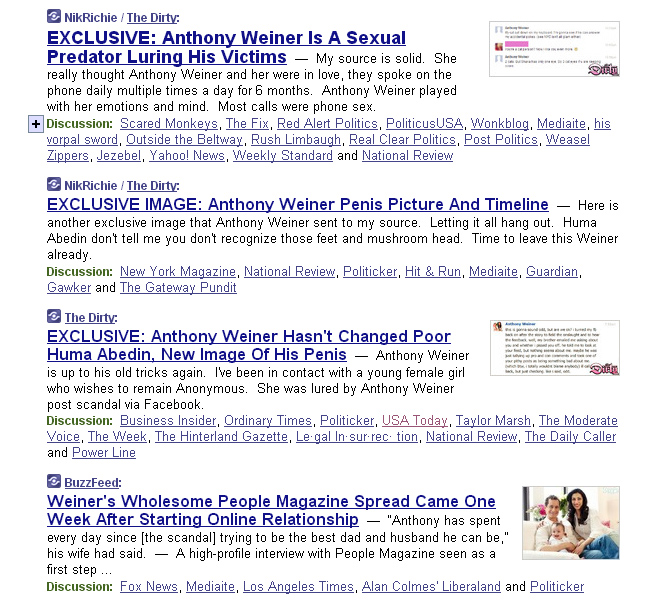 This is a different kind of slut shaming.

Anthony Weiner is not a good choice for mayor of New York City precisely because he doesn't have good judgment. It has nothing to do with sex, his sexual proclivities, or his desire to use social media to practice fantasies or whatever those Carlos Danger moves really are. He's simply a modern man, fapping his way past the glow of his cellphone or laptop, getting his rocks off in private.

In America, privacy is dead and being a normal deviant (we are all deviants in some way, each and every one of us) is not enough anymore. Once Weiner realizes that you can't do these things and be a politician, we'll all be better off. He can have his regular life, his secret life, and he can thrive, to be honest with you. But he can't hold positions of public trust and bask in the appreciation of the people for his public service.

In politics, you have to hide your deviancy and appear normal. Weiner has thumbed his nose at this. Could you call him a pioneer? An outlier? I don't know. But I do know this--Anthony Weiner is simply not a talented legislator or leader; he's not smart enough or good enough to forgive him his transgressions. He is photogenic and can speak well enough into the camera. That's not enough to rise above the tidal wave of traffic-driven clicks that have reduced his public accomplishments to a laugh-fest over getting hard because someone on a chat connection is able to help him yank his crank while his family sleeps in the background.

In years past, the great men of history were all sexual predators and horrible, horrible husbands. They crawled in the gutter, eating sexual practices out of the middle of their own souls, lubrication optional. Weiner is just not good enough to put him up there with Eisenhower or Clinton.

Someone needs to give the man a job in the private sector so he can go away.