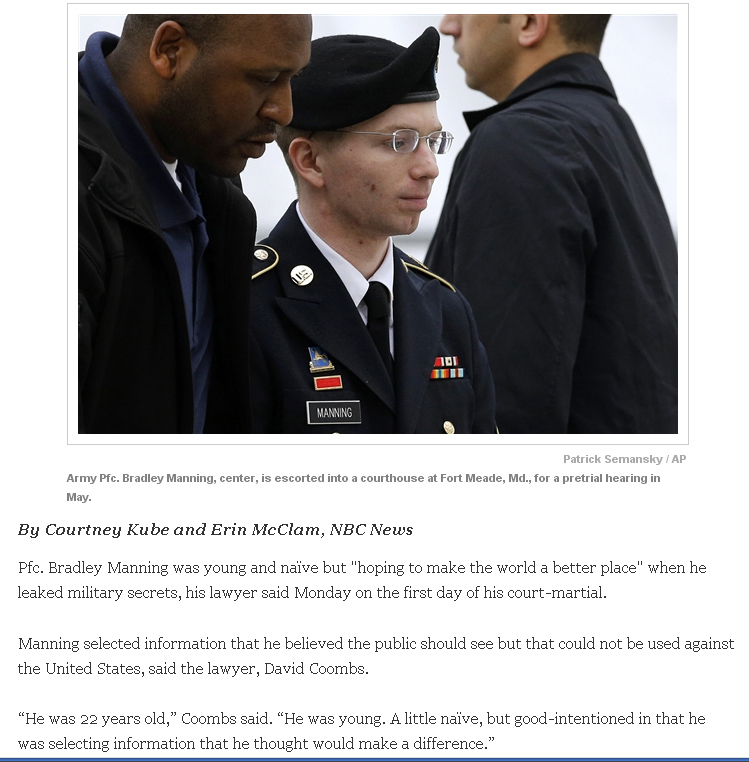 Bradley Manning joined the United States Army and swore an oath. He also signed agreements to protect classified information. And so, he's on trial for turning his back on the Army and handing over classified material to people who were not authorized to have it. This should be an open and shut case but emotions and pathos are getting in the way of all of this.

Were it not for the fact that people are automatically inclined to feel sorry for people like this, we wouldn't even be talking about Manning. He is not a hero nor is he someone who blew the whistle on something that was illegal. He dumped a mountain of classified material into the hands of people who make money by embarrassing governments around the world.

Manning told his correspondent Adrian Lamo, who subsequently denounced him to the authorities: "Hillary Clinton and several thousand diplomats around the world are going to have a heart attack when they wake up one morning and find an entire repository of classified foreign policy is available, in searchable format, to the public ... Everywhere there's a US post, there's a diplomatic scandal that will be revealed. Worldwide anarchy in CSV format ... It's beautiful, and horrifying."

He added: "Information should be free. It belongs in the public domain."

Manning, according to the chatlogs, says he uploaded the copies toWikiLeaks, the "freedom of information activists" as he called them, led by Australian former hacker Julian Assange.

Assange and his circle apparently decided against immediately making the cables public. Instead they embarked on staged disclosure of the other material – aimed, as they put it on their website, at "maximising political impact".

Assange did it for the cash, in other words, hoping to guarantee himself years of donations. When governments around the world cut off Wikileaks from those donations, and when Assange couldn't handle the idea of being held accountable for his actions in Sweden, he chose to hide in an embassy.

Manning wanted to be a somebody, and he wanted "worldwide anarchy." And we're supposed to feel sorry for him?

I deplore the conditions in which he was held; I think the military made a massive mistake in holding him the way that they did. I do think Manning wanted to kill himself, and they need to undertake reforms to ensure that the military can incarcerate service members without subjecting them to what Manning was put through. But, I refuse to feel sorry for him. Worldwide anarchy? What an immature, violent little man.