Where Do You Park Something You Will Never Use Again? 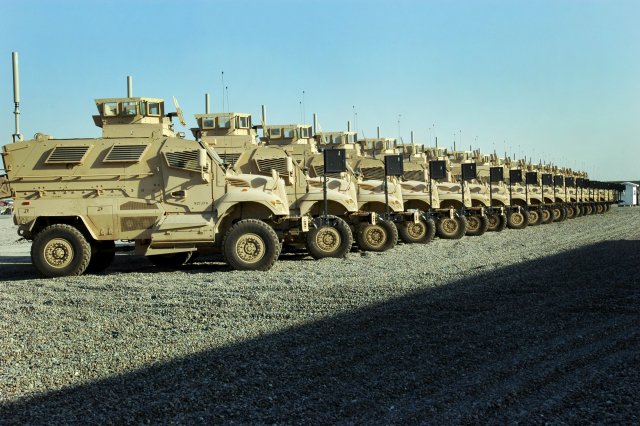 After all of the screaming about going to war with the Army we had, not the one we wanted, we learn what will happen to it all:

The Pentagon has determined that it will no longer have use for about 12,300 of its 25,500 MRAPs scattered at bases worldwide, officials said. In Afghanistan, the military has labeled about 2,000 of its roughly 11,000 MRAPs “excess.” About 9,000 will be shipped to the United States and U.S. military bases in Kuwait and elsewhere, but the majority of the unwanted vehicles — which cost about $1 million each — will probably be shredded, officials said, because they are unlikely to find clients willing to come pick them up.

A year ago, there was a wonderful plan floating around out there to take care of all of the MRAPs:

The US Army is devising a long-term plan to help preserve its fleet of 20,000 mine-resistant, ambush-protected vehicles (MRAPs), following the completion of the mission in Iraq and strategic withdrawal from Afghanistan by the end of 2014.

Colonel Mark Barbosa, US Army G-8 department director and focused logistics division chief, said that roughly 60% of vehicles would be kept in storage or prepositioned stocks. While 30% would be deployed with brigade combat teams to help in troop transport and route clearance missions, with 10% used for home-based troop training.

"The MRAPs were a very successful programme. The $45bn investment had Office of the Secretary of Defense oversight, with very strong support in Congress," Barbosa added. "The platform was rushed to theatre to protect our soldiers and it did very well."

We will foolishly hang on to the vehicles that we do not abandon; they will be as useless in the next war as anything left over from the Vietnam War would have been to our troops over a decade ago. America will not be fighting any wars on this scale halfway around the world anytime soon. Military vehicles have a shelf life, and they rapidly deteriorate when left idle. If we do fight another war like Iran or Afghanistan in the next few years, that will be the end of our military, which is now broken and exhausted.
The MRAP was a boondoggle. We should have removed our troops BEFORE we needed thousands of these things.
Get rid of all of these vehicles. They will be useless in the future. If we hang on to them, policymakers will find a way to put troops in Africa and do we really need to discuss what sending three or four brigades of Americans into the back areas of Chad would mean for what is left of the U.S. Army?
We are not going to fight a COIN-centric war any time soon and we should not continue to equip ourselves to do so.In a land war against an enemy with tanks and any kind of anti-tank weapon, these high-profile vehicles will not survive. They were built for the Improvised Explosive Device, not the shape-charged projectiles that a land army would use. These are the vehicles of an army of occupation that has to patrol, endlessly, and we would be foolish to seek out another war like that again.
So much for fiscal restraint, asset management, and "the surge" into Afghanistan. The end result of all of this misery? A million dollar vehicle being pulled apart with worn-out tools by underpaid contractors in a far off compound. A hundred years from now, the rusting hulks of what is left of our "bomb proof" vehicles will still be in Afghanistan, left in piles and abandoned. You can see the stuff we left behind in Vietnam, of course, but we didn't have anywhere near as many armored vehicles there.
Oh, and you paid for it. You paid for it with money that no longer exists that could have paid to fix bridges, roads, schools and lives.
on June 20, 2013