They Sent a Captain 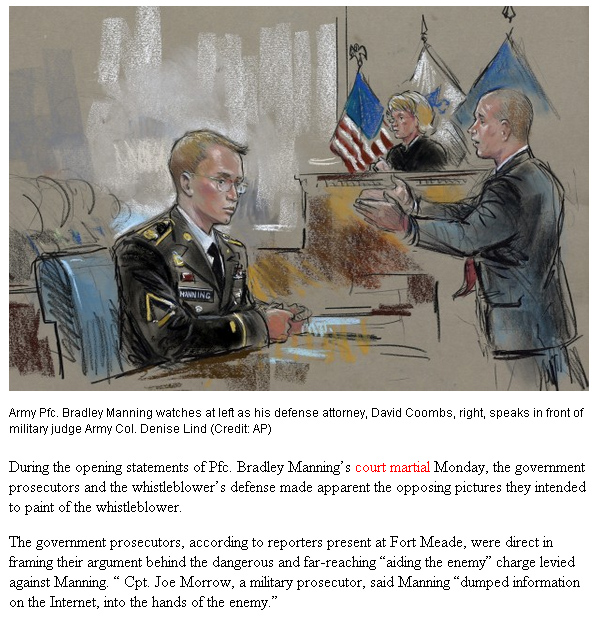 The prosecution of Bradley Manning is being handled by military prosecutors and is happening inside of a court room on Fort Meade, Maryland. This facility is over on the "old" side of Fort Meade (at least it was when I was stationed there) and it is located in the area where bakers were trained for the First World War and where Generals Patton and Eisenhower were junior officers.

Fort Meade has a junior officer running Manning's case, probably under the watchful eye of someone with a lot to lose.

There is a bridge over there with a limestone plaque that has seen better days. The plaque is in Latin, and it was put there by the prisoners of war that built it during World War II. There is a cemetery over there as well, and there are all manner of people buried there. Somewhere, on Fort Meade, are the graves of the POWs who didn't get to go home after the war. This being Maryland, there are graves everywhere and planning is something they do as an afterthought. The buildings are ancient, the roads are terrible, and there is a great deal of unused open space because Fort Meade has long been an abandoned post, for all intents and purposes.

Fort Meade is quite large. When you cross over Highway 32 on a special bridge, you are on the part of the post where there are numerous gunnery ranges. For miles in all directions, once you are in this area, you are walking on spent ammunition and unexploded mortar rounds and shells of numerous kinds, all dating back about a hundred years. There are hundreds and hundreds of acres of extremely valuable real estate in this area that would normally be developed into townhomes, stripmalls, and retail outlets. I say normally, but the catch is, no one can do anything with this land except train on it because of all of the hassle that would go into removing the military-grade explosives buried in the ground. As far away as the Russet Community Association area, there are still artillery shells that turn up in gardens and in yards. Back in the day, when Fort Meade was crawling with actual soldiers, they shot the whole place up and no one bothered to aim.

In another part of the old fort, there is a winding road that goes up a low hill; at the top of that hill, there used to be an Army headquarters building. All you will find there now is overgrowth and asphalt. Much of Fort Meade looked that way a decade ago--abandoned, unused, and neglected.

The United States Army needs to convict Manning of the crimes he committed but it has badly bungled the incarceration of this soon-to-be former soldier. They never should have turned him over to the Marines, in other words, because the sympathy being generated on his behalf is an outrage. Manning wanted fame; he wanted to "be" somebody because the Army soon realized he was nobody. This caused him to turn on the military and betray his country.

When you take classified material and hand it over to someone who isn't supposed to have it, you are one of two kinds of people. You are either a highly-placed insider in Washington DC who has been told to leak the information on behalf of the interests of the President or you are operating under the misguided idea that the government won't prosecute you for being a whistleblower. Good luck figuring out which one Manning believes himself to be in his own mind.

In this enormous prosecution, there is this poor Captain, and he is in a tough spot. Inside of a crummy building, on hot days, he has to figure out how to prosecute a misguided young anarchist who forgot he was a soldier.
on June 04, 2013