The Soldier in the Band 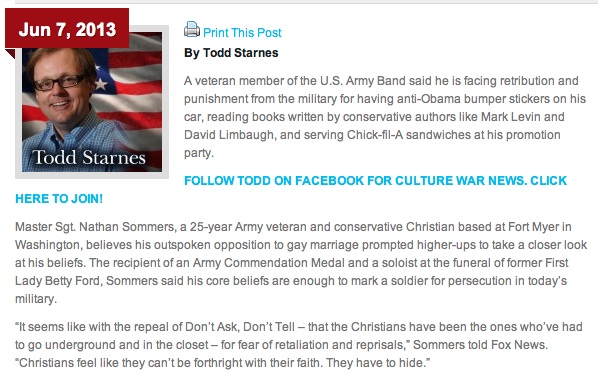 On his own time, he is free to read whatever he wants to read as far as Hannity, Levin and Limbaugh are concerned. He is free to follow the UCMJ as well, and if he expresses displeasure about the chain of command or regulations now being enforced, he needs to make damned certain as to whether or not this is worth throwing away his career (as a singer in the United States Army--think about that) over because that's what it is going to come down to for this soldier.

Sommers has gone beyond having an opinion to making his opinion an expression of politics while in uniform. His chain of command has said that he needs to check his attitude and his disobedience and get back into line with his behavior. I'm sure that they have counseled him and that they just want him to keep his advocacy in line with their idea of good order and discipline.

Clearly, Sommers has gone beyond good order and discipline and has moved into that grey area where it becomes more about attracting attention to himself (hello, news media and retirees) and less about shutting his mouth and playing his band instrument.

In Army parlance, this guy is a joke. He's celebrating the winning of an ARCOM and he's proud of being a funeral soloist? Good for him. Real soldiers don't brag on their ARCOMs.

I'm sorry but he's a musician. He's in the band. He wears the uniform and the rank, but please. He needs to shut his ass up and retire honorably and then go out and make all the noise he wants to make.

Becoming the next LTC Terry Lakin is not something this clown needs to pursue as a career goal.

Sommers is, I'm sad to say, not merely a conservative in uniform but an intolerant bigot:

Sommers claims he was told by an openly-gay superior officer that unidentified members of the U.S. Army were offended by his statements on Twitter.

Sommers was reprimanded, given a bad report and targeted by an investigation, which found he had tweeted in 2010: “Lordy, Lordy, it’s faggot Tuesday. The lefty loons and Obamabots are out in full force."

I love the words "openly-gay" in this article. Clearly, no one has explained to Fox News that being openly-gay in the military is legal now and is not something salacious or naughty. It's as if Sommers does not have to follow the orders of an openly-gay officer or even someone who is sorta-kinda-gay.
Sommers plans on filing a lawsuit. I hope he has saved a lot of money because he is well on his way to losing his retirement benefits.
on June 07, 2013