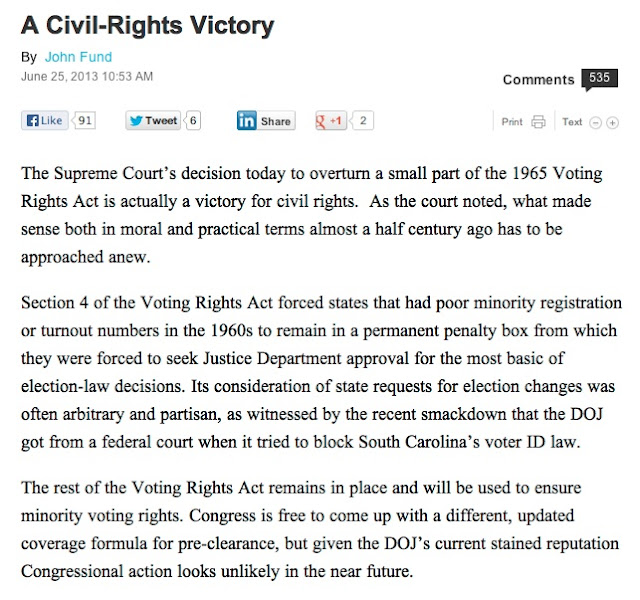 John Fund is a conservative who is unafraid to tell you exactly why he thinks we should stop letting minorities vote. Be thankful for this horrible man and his horrible ideas. Without them, it would be impossible to see what the face of race-based bigotry really looks like when it comes to the establishment conservatives of the Republican Party. It's a smug face these people wear and they have been enabled by a conservative Supreme Court that is going to leave a lasting legacy of shame and incompetence. In our nation's long history of respecting the rule of law, we have a five person parade of ninnies, and these men are the real faces of institutionalized racism and stupidity.

When he says that "the rest of the Voting Rights Act remains in place" he is telling the truth. What was struck down today was the means by which those tools can be utilized to ensure that states like Florida and Arizona and Texas can be stopped from suppressing the votes of minorities (people of Hispanic descent) and that's all anyone needs to know about that.

In each and every state, people are now going to have to fight harder for the right to vote. If you think that the 2016 election is going to be decided early by the heavy voter suppression that will now follow this Supreme Court ruling, you would probably be correct. We will see an even heavier hand used to stop people from voting, and it will disenfranchise a shocking number of people.

That's pretty much the only way we will get this fixed. We are going to have to live through a nightmare of an election, and then you might see progress in the other direction. You might see someone stand up for the right to vote. Until then, welcome to a country where conservative legislators are going to lose sleep trying to figure out technicalities and the means by which they can stop people from voting.
on June 25, 2013