SNAP is Under Attack 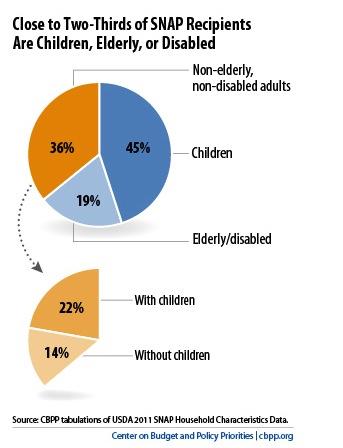 America has made the decision to starve children and the elderly. Don't believe me? Read it for yourself:

The majority of the bill’s SNAP cuts come from eliminating a state option known as “categorical eligibility.”  Congress created this option in the 1996 welfare law, allowing states to provide food assistance to households — primarily low-income working families and seniors — that have gross incomes or assets modestly above federal SNAP limits but disposable incomes in most cases below the poverty line.  The bill also would eliminate SNAP incentive payments to states that have improved payment accuracy and service delivery, would cut nutrition education funding, and would curtail a state option that reduces paperwork for many households with utility expenses and also lowers state administrative costs.  Table 1 provides information about the effects of the provisions in specific states.
The proposed cuts would cause significant hardship to several million low-income households.

By eliminating the categorical eligibility state option, which over 40 states have adopted, the bill would cut nearly 2 million low-income people off SNAP.

According to the Congressional Budget Office (CBO), 210,000 children in low-income families whose eligibility for free school meals is tied to their receipt of SNAP would lose free school meals when their families lose SNAP benefits.

Eliminating categorical eligibility would cause some low-income working households to lose benefits simply because of the value of a modest car they own.  Many of these families would be forced to choose between owning a reliable car and receiving food assistance to help feed their families.

Contrary to proponents’ claim that the bill’s SNAP cuts are needed to rein in out-of-control program growth, CBO has found that SNAP’s expansion in recent years is primarily due to the severe and prolonged economic downturn and that SNAP spending will fall significantly as the economy recovers.  CBO projects that the share of the population that participates in SNAP will fall back to 2008 levels in coming years and that SNAP costs as a share of the economy will fall back to their 1995 level by 2019.

Conveniently, we have the distraction of the latest revelations about government spying. This will allow everyone to focus on the wrong issue and ignore the fact that people are, basically, going to go hungry.

This is the kind of thing worth getting outraged about.
on June 06, 2013