Obesity and the Military 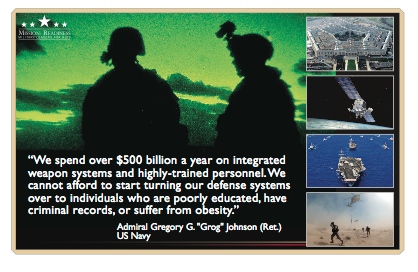 Yes, we wouldn't want anyone fat to sit in a room and fly drones around and kill people by remote control, would we? [pdf alert]

This mentality stems from several hundred years of institutional bias. If you do not look good in a uniform, you cannot serve in that uniform. The military is going to have to either accept tubby and fat people or they are going to have to continue to outsource this work to contractors who are, by and large, pretty doggone fat. As in, shove a pair of canned hams in your pants fat. Jeebus.

You see, the military routinely kicks out fat people. Those fat people take their skills and their clearances and go to work for contractors. Those contractors turn right around and run these expensive weapons systems. They have criminal records, they are woefully short of ethics, they are paid a great deal, and they are also fat. Have you ever seen a group of defense contractors? My God, they are huge and they do everything. They fix things, they configure things, and they run things a lot of the time. A good number of them cannot walk up stairs without splitting their pants. I mean, holy hell in a Twinkie kind of overweight.

They are the EXACT SAME PEOPLE who cannot serve in the military. Except that they are doing the jobs military people cannot do because they don't have the skills. It's not rocket science. The contractors are doing everything now, and we are seeing the results of over a decade of outsourcing things to, ahem, lardasses.