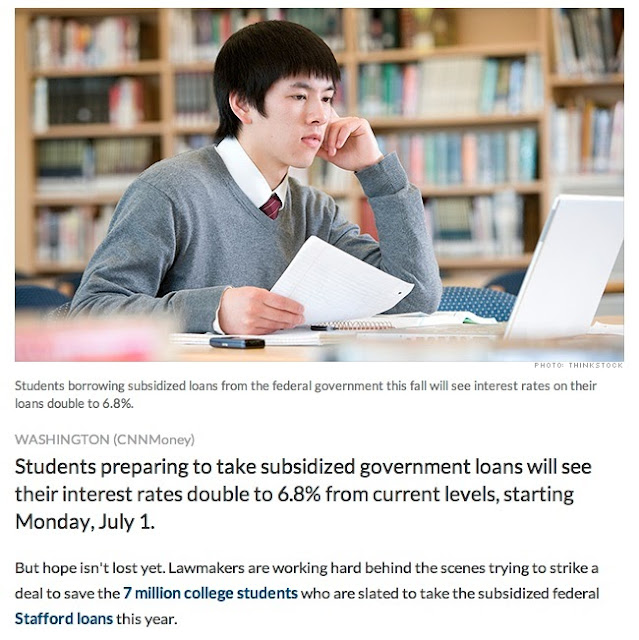 When stories like this crop up, I never know whether to blog about them through a personal anecdote or through the veil of commenting on the impact that doubling student loan interest rates will have on underemployed and underpaid young workers.

My first go at a college degree ended badly. I was a little more than halfway done, I quit Winona State University because it was a useless endeavor (think large classes, scantron sheets, disengaged professors, and an emphasis on anything but the Humanities) with a massive amount of student loan debt and no way to repay it. I made a few attempts, of course, and I even endured the weekend threat of having someone call me up and pretend that my loans were going to go into default if I didn't make a credit card payment. This was in the 1990s and you could do that then--I had no way of being savvy about these things because where could you look that up? The Internet hadn't come around yet and people were making a killing through collection efforts that today wouldn't fly.

The military helped me pay off over $12,000 in student loan debt and the rest I had to pay off--the interest that the Army's program wouldn't cover. Jeebus, it was misery. After my four year contract ended, I had an additional three years of active duty left because our battalion's retention NCO at Fort Gordon was functionally incompetent and allowed me to re-enlist with a bonus. After I left Gordon, he was relieved and my contract could very well have been invalidated if I had remained in the battalion--I'll never know.

Here's the thing--that 3 year commitment put me in the Army over two and a half years past 9/11, and that meant that I was eligible for 80% of the 21st Century GI Bill benefits that I used in Germany to finish my degree. Under that program, I somehow managed to complete a double major in English and History, with a minor in Humanities, at University of Maryland University College (about 3/4ths of it online). Total cost to me--I made about ten grand because they paid me Basic Allowance for Housing. I paid everything I had to make up--the 20% not covered by the GI Bill--out of the BAH. And it was a hardship for the family because I did not work during this period of time. Luckily, we did not need my income. But, the fact remains, we got through it thanks to this program.

Yep. And I turned down 9 months of GI Bill benefits, simply because there was no reason to keep going after graduating, so that's extra benefits for someone else, in theory, and money I chose not to take out of the program. And I left money on the table because I did not need a Spring 2013 scholarship. Oh, and I did get good grades, which added some scholarship money to the pie, but not a lot.

Does that mean everyone should join the military? No, but it does mean that service should gain people something. If you serve your country in some capacity, that should be worth something. We should incentivize service and make it about rebuilding this country's infrastructure or our public places.

I'm saying that, instead of saying "screw you, I got mine," we should figure out how to make what happened for me happen for a lot of other folks. I was lucky and I'm eternally grateful for what happened for me. This is why I vote against people who believe in "screw you, I got mine." They don't understand what helping people succeed means in the long term. Instead of leaving college with $150,000 in debt, why can't people leave college with a few grand in the bank, provided they completed their degrees and got good grades?

What a revolutionary thought--starting out someone at 22 or 23 with no debt and a few thousand dollars in their pocket. No idea how to get there, but, why wouldn't that be a positive thing for society?

The process of loaning money to young people is about as completely out of whack as anything in American society has ever been. It strips wealth from people and saddles them with crushing debt levels that cannot be sustained. It ties the hands of people who, if they had a little freedom, could do amazing things with the productivity and their efforts. The system is feeding itself--by forcing people to fight for high-paying jobs in order to repay their student loans, we deny ourselves service-minded people who would otherwise choose professions or careers making a difference.

We are fucking ourselves sideways to make more money for people who steal untold amounts of cash simply by charging higher interest rates to borrow money to pay for college classes that are over-valued and won't add up to degrees that are worth a damn.

If that's not something that needs fixing, like right now, then what the hell should we be fixing?
on July 01, 2013