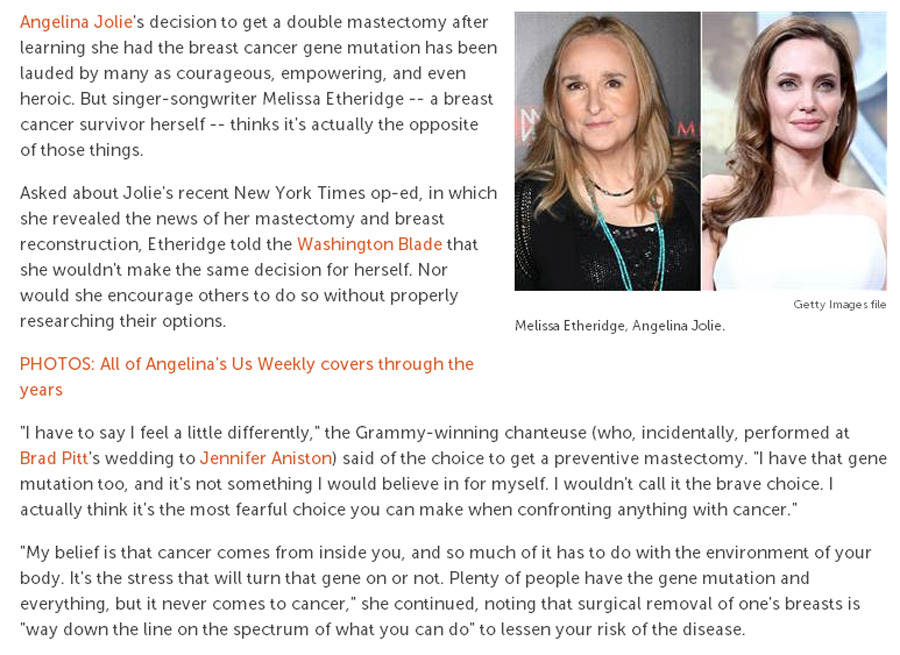 Melissa Etheridge is attempting to supplant Jenny McCarthy as the purveyor of celebrity-based medical advice that is rooted in bullshit and superstition.

Her attack on Angelina Jolie is based on the myth that acidity in the body has a determining impact on cancer. It does not:

While tumors appear to develop acidic pH, we have not yet found any clinical data supporting claims that diet can change the pH balance in the microenvironment of tumors, or, if it could, that doing so would have a clinical effect on the disease.
"The unsubstantiated theory is based on lab studies that suggest cancer cells thrive in an acidic (low pH) environment, but cannot survive in alkaline (high pH) surroundings.
... While these findings are accurate, they apply only to cells in an isolated lab setting. Altering the cell environment of the human body to create a less-acidic, less-cancer-friendly environment is virtually impossible."
Source: aicr.org

While proponents of this myth argue that avoiding certain foods and eating others can change the body’s pH level, these claims stand in stark contrast to everything we know about the chemistry of the human body. Acid-base balance is tightly regulated by several mechanisms, among them kidney and respiratory functions. Even slight changes to your body’s pH are life-threatening events. Patients with kidney disease and pulmonary dysfunction, for example, often rely on dialysis machines and mechanical ventilators (respectively) to avoid even small disruption of acid-base balance.

Lastly, home “test kits,” which measure the pH of urine, do not relay information about the body’s pH level. True, foods, drinks and supplements will affect the acidity or alkalinity of urine, but it is the only fluid that is affected. In fact, excess acid or base is excreted in the urine to help maintain proper pH balance in the body.

The take-away: What you eat can have a profound affect on your cancer risk, but the acidity or alkalinity of foods is not important. Instead, focus on making dietary choices that can truly affect your risk: Eat a wide variety of vegetables, fruits, whole grains and beans; Limit consumption of red and processed meats; Enjoy alcohol in moderation, if at all.

Etheridge is thus using her own status and celebrity (meager, and declining with each passing year) to influence people to believe something that she believes which has been proven to be a myth. The amount of medical mythology that floats around out there is already well past the danger point, and to continue pushing this bullshit is irresponsible. Etheridge can believe whatever she wants to believe--ignorance is a right--but she needs to explain her scientific basis for all of this so that the actual scientists can, you know, get behind her and her expertise and correct their mistakes.

Far too many celebrities live in the bubble of holistic and alternative medicines. McCarthy and her anti-vaccination advocacy have helped sentence kids to unnecessary health problems and risks. This is all based on for-profit alternative medicine practitioners who profit from celebrities who cling to their stupid misconceptions about health because they refuse to believe that they are like everyone else and did things that made themselves ill like commoners.

Their need to be exceptional and different from everyone else opens up the opportunity for quacks and snake-oil salesmen to take advantage of their vanity and persuade them that they, as special people, only got sick because of some exotic and unsubstantiated reason. They appeal to the celebrities precisely because they have an answer as to why something went wrong--it was not because they were dumb like everyone else--it was because of this mythical cause for which only they have the cure (which, as always, has not been evaluated by the Food and Drug Administration) that is based on emotions, feelings, and a gut instinct that exists outside of scrutiny.

There are, perhaps, some things that are wrong with what Angelina Jolie did to herself, but I haven't seen anyone refute the science of what she did. I have seen people tackle the economics of her decision (she is wealthy and can thus afford what many others can not) and the emotions of her decision, but the science behind why she did what she did and the genetics are solid. This is a woman who, at a young age, has lost two female relatives to breast cancer. She took the statistically sound option and had a double mastectomy.

Now she has to put up with being criticized because some nutty celebrity still clings to the acidity myth?

The world embraces ignorance, and celebrities help it along.
on June 18, 2013