James Taranto is a Rape Apologist 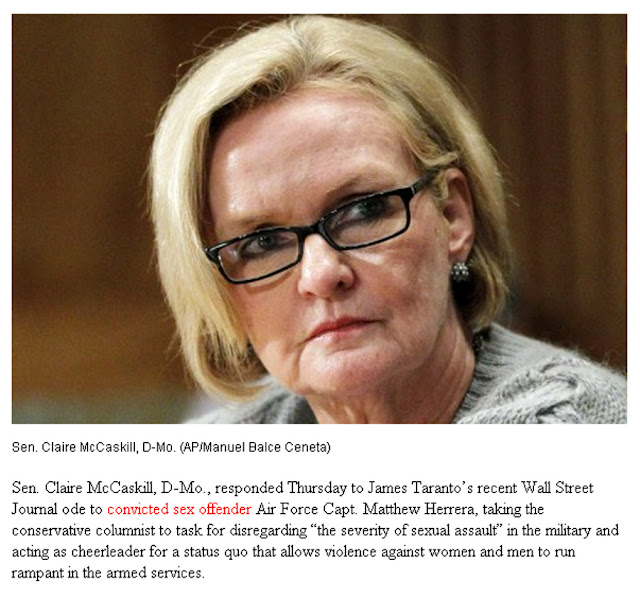 Here's the gist of what she said:

It’s notable that Mr. Taranto spends little time discussing the actions of Lt. General Susan Helms—the commander in question, whose lifetime of service to the U.S. Air Force is worthy of our gratitude and appreciation. Instead, he re-litigates the facts of a case he didn’t witness, comparing the recklessness of sending a text message or having a drink, to the “recklessness” involved in sexually assaulting another person.

Ultimately, in the sexual assault case he references against Capt. Matthew Herrera, the task of examining the evidence and hearing the witnesses’ testimony doesn’t belong to columnists or elected officials—it belonged to a judge and a jury—two words that you won’t find in Mr. Taranto’s piece…

Mr. Taranto says that I’m involved in a crusade to “criminalize male sexuality.” For decades, from my time as a courtroom prosecutor and throughout my career in public service, I have indeed done my best to criminalize violence. And I have never subscribed to Mr. Taranto’s bizarre and deeply out of touch understanding of sexual assault as somehow being a two-way street between a victim and an assailant.

The rule of law means nothing to people who are convinced--in their abundant gut--that being an asshole about everything is their God-given right. Taranto is a good example of what being an asshole will turn you into right in front of everyone else--a rolling joke who has been handed way, way too much real estate on which to print his garbage. The mere fact that he would apologize or defend rape would normally get a person fired if they weren't already the courtiers to an elite that doesn't care what the common people do to one another.
There is no meritocracy among pundits.
on June 27, 2013