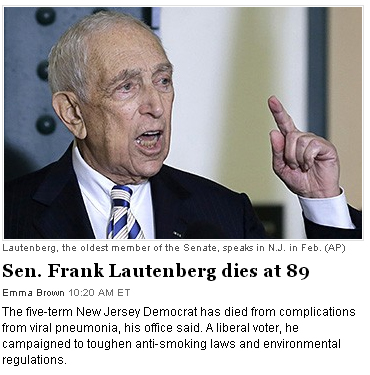 Frank Lautenberg fought like hell for consumers and for public safety. He was a tireless advocate of doing exactly what Republicans hate about government; he made it work on behalf of people.

His legacy on gun control is what the Post should have led with. The Lautenberg Amendment was designed to ensure that anyone convicted of domestic violence would have their right to own a weapon taken away. That's the kind of public safety legislation that we are sorely lacking right now.

The thing about Lautenberg that I did not know was that he beat an early opponent by labeling her a national monument. When Lautenberg beat Millicent Fenwick, he claimed that, at 72, she was too old to serve. Lautenberg died at 89.
on June 03, 2013