Everyone Spies on Everyone Else 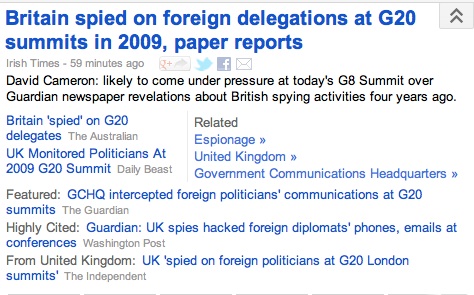 Do you know what has been revealed this past week? The naivete of the supposedly smart crowd. That is the case here--anyone who thinks that the British have NOT been spying on others needs to have their head examined.

It can be reasoned that only those countries who have nothing but contempt for themselves would eschew spying or surveillance. No one wants to be helpless and incompetent. Spying is the assertion of the legitimacy of the state--somewhere, in every language, is some version of 'this we'll defend.'

Going back as far as anyone can remember, there have been spies. There has been surveillance and there has been the interception of communications. This is not even a modern or a Napoleonic-era thing--this goes back to whomsoever was reading the mud tablets of their adversary while someone distracted the merchants behind their counters and the men who weighed the money and the wheat. This is a human condition for which only the really, really infantile would claim to be something shocking or new.

Everyone spies and everyone gathers information. Information is then used to assess the situation and go forward. The world is not safe, nor is it full of virtuous people who always do the right thing. If you don't like the tactics of the Americans or the British, grow up. Our adversaries have unlimited budgets and the weight of the state to do far, far worse.
on June 16, 2013