Edward Snowden is Not a Hero 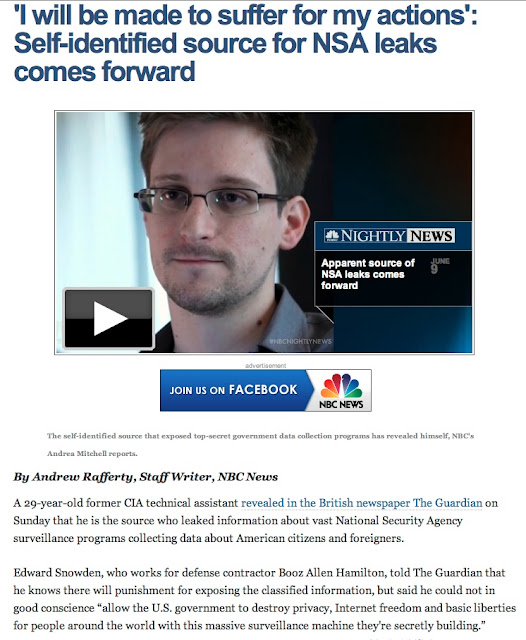 The things that I have read today make my head hurt.

There are a lot of people who will fall down and worship this young man, Edward Snowden, and that's entirely because we are a country that knows nothing about what it takes to stop the people who want to attack us. We are anti-intellectual, against anyone with knowledge we cannot sell, anti-establishment, contrarian, willfully ignorant if it challenges our prejudices, and as long as the government leaves us alone so that we can have our secret lives of self-interest, we are happy (except that, despite living in amazing times, we are not happy).

Everything with this man begins with "I" and ends with how he will not tolerate living in a surveillance state. This is asinine. This is what conspiracy theorists like Alex Jones thrive on. We have lived in a surveillance state for as long as there have been nation/states in this world. Perhaps this man grew up in a world where the king didn't have his spies. I have no idea.

The problem is evident when you start to think about what has actually happened. During the week that the brand new president of China has arrived in America, a massive disclosure of classified information has embarrassed the government, harmed our national security, and weakened our ability to keep track of people who want to kill Americans. The Peoples Republic of China is not our enemy, according to Mr. Snowden, and he says that with all of the self-centeredness of a young man who has been addicted to political science and reading blogs. Good for him. His education will happen whether he wishes it or not.

The PRC has rolled someone, and rolled them hard.

Are there people who hate us? Who want to attack us? How serious should we be about all of this? It comes down whether or not you think all government is evil or whether or not you can accept imperfect governance under the rule of law. Do you want what we have or do you want anarchy?

America's enemies are only marginally of any concern to people like this, if at all, and when they do think of our enemies, they do not grasp the fact that there are vast surveillance states all around the world who protect no civil rights, who tolerate no privacy, who enlist their citizens to spy on one another and allow their populations to have no recourse in the courts. America helped build some of those countries but that was because we wanted to tear down other countries who were much better at being surveillance states because the Soviets doubled down on their willingness to bankrupt themselves in order to become a world power. The law still means nothing in Russia, and it probably never will.

In America, you may not like being surveilled, but you have no equal anywhere when it comes to the rule of law. The solution in most places is a bullet to the head. Run for the highest office in the land in places like Egypt, Ukraine, Pakistan or Malaysia and then tell me I am wrong. In this country, someone snooped in Bill Clinton's passport file and the entire government crapped itself with oversight and compliance.

Mr. Snowden has caught what afflicts Julian Assange, Bradley Manning, and Glenn Greenwald. They all want to be somebody. They are useful idiots. They are the purity trolls we've been sentenced to live with. They are anarchists whether they will admit it or not--they want America as an idea to end because that will bring evil in the world to a screeching halt. They espouse the Noam Chomsky idea that America is the source of everything bad that happens in the world. The problem is, there is already a Chomsky, and becoming someone with his stature will secure them a place in history that they can use to enhance their own power and influence. They're not really interested in doing anything because being somebody is preferable to actually having to think for a living.

You can be somebody as long as you hurt the government or governments that provide you freedom and security, and you can hurt these entities without fear because there will always be a safe haven or a lawyer or an embassy that can bail you out. This is how anarchists thrive--under the umbrella of protection that they, themselves are unwittingly destroying with their actions. These people lash out because they've been nobodies or they've been marginalized or they've been cheered on by dupes.

In the real world, in places like Colombia or China or Nigeria, you're dead in moments when someone decides you are an enemy of the state and you are dead because no one has figured out that these places have no respect for any rights, human or otherwise, and they are not in any hurry to be like America. We've tried to make Colombia more like America but Colombia will always be exactly what it is--a nation/state with interests that we don't share. We keep trying to make the world a better place when we really need to accept it for what it is and protect our people, protect our interests, and enjoy a lifestyle fitting for a free and democratic people.

Do you want to drive our enemies crazy? Enjoy a ballgame, go to the mall, and do whatever you want. Let your freak flag fly. Be weird and ignore the surveillance apparatus (I love how people who spend all day in front of closed circuit television cameras can express outrage when their banal expressions of whatever about nothing on the Internet might be under someone's watchful eye).

You live in a country where you can do these things. The celebration of the American way of life is the single greatest evil the world has ever known because the rest of the world can't stand the idea of someone having a day in service to themselves and not the state.

You see, all the evil in the world comes from America, and they like it that way. It makes it easier to thrive.
on June 09, 2013