Edward Snowden is a Megalomaniac 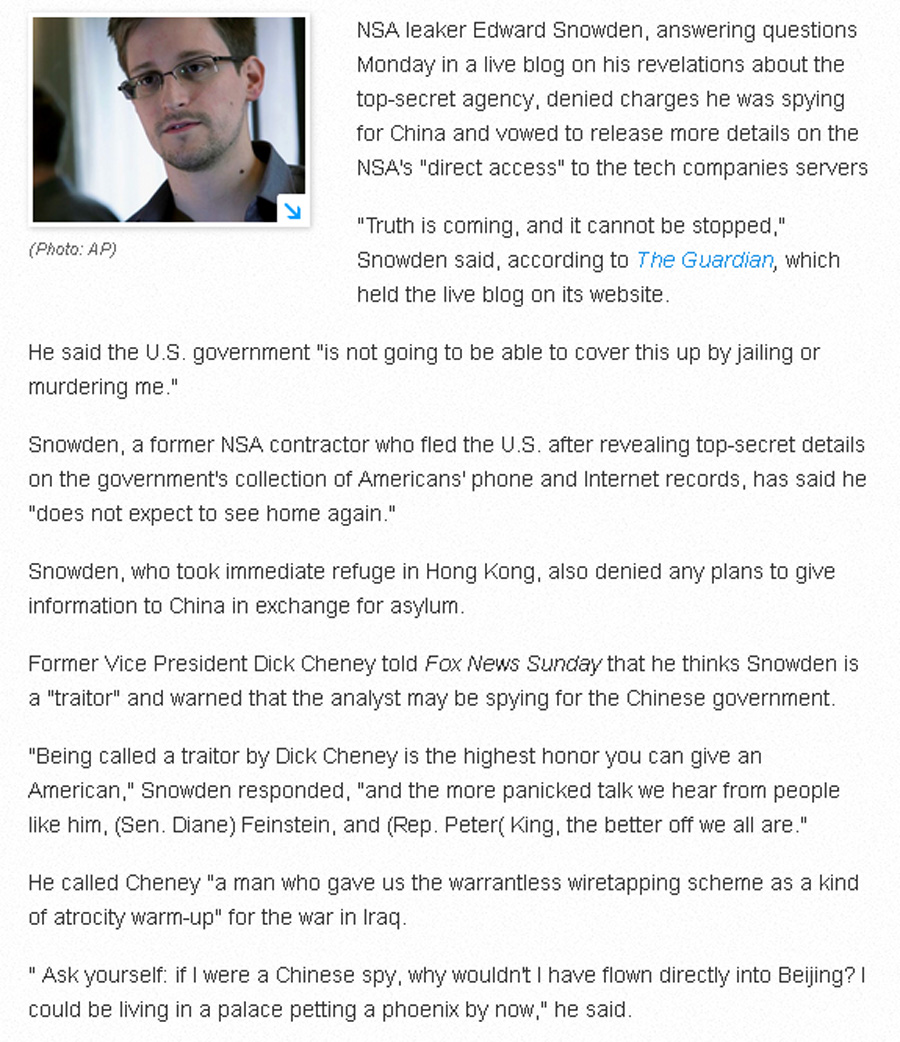 If I were one of the many people who jumped to the defense of Edward Snowden, I would be looking for a way to walk it all back and delete those old blog posts because today was the day that megalomania set in for this troubled young man.

And, really, this is no longer about what the government is or is not doing. This is about his public meltdown and his descent into delusions and irrationality. His role as the only person who can tell everyone the truth, which was evident the moment he asserted that he couldn't live in a world where his government was doing things he found unconscionable, has brought us to a debacle, not a moment of enlightened discussion. Has the law been broken? If not, then what is this about?

He has socialization issues and a need to be the equal of the people he has a problem with. In reality, he's a 29 year-old who simply hasn't done anything other than steal secrets, run to Hong Kong, and parade them in front of the world. This lack of accomplishment--why not write about what you know and accept punishment as an act of civil disobedience?--and this cowardice will result in the disruption of untold numbers of lives. Private contractors with clearances who have given money to Ron Paul should wake up--this government doesn't want any more screwed-up kids flying to Asia with thumb drives full of crap.

When the former Vice President of the United States calls you a traitor, you don't laugh it off and wear it as a badge of honor for all of your libertarian/privacy advocate friends to chortle about--you really don't. If you arrive at a point where Dick Cheney knows your name, you've already lost. A life lived trying to insult or offend Dick Cheney does not end well, no matter how many times you and your buddies want to joke about his trial for war crimes before The Hague.There are people in this world you can piss off and then there are people you should avoid upsetting. Don't upset Dick Cheney. Unlike virtually every other Vice President in American History, this man comes with a body count that has no equal.

In another time, they would have gotten Edward Snowden the help that he needs. They would have found him some outlet for his issues and dealt with his mental health. In modern society, this is now manifested as damage to the state by way of what was available at work, spread throughout the media and flashed all over the world.

I am no expert on insanity or mental health, but Snowden has seemed crazy to me from the get go. When someone can't stop talking about themselves and when someone welcomes a debate with the former Vice President, there has to be something wrong there.

Snowden does not understand the intelligence world:

Journalists should ask a specific question: since these programs began operation shortly after September 11th, how many terrorist attacks were prevented SOLELY by information derived from this suspicionless surveillance that could not be gained via any other source? Then ask how many individual communications were ingested to acheive that, and ask yourself if it was worth it. Bathtub falls and police officers kill more Americans than terrorism, yet we’ve been asked to sacrifice our most sacred rights for fear of falling victim to it.

This is not how we function and it is not how things work. Basing this on what is "solely" prevented by collecting intelligence material is laughable and ridiculous. You don't do anything based on one form of intel; you collect a broad range of pieces of information and then you fuse them together. You combine signals and imagery and human-gathered intelligence and you fill in the gaps with what you can add to those blended pieces of intelligence.

My guess is that we now know exactly what Snowden knew--nothing. Because he came from the fringes and worked on networks, he is ignorant of why we actually do sift through massive amounts of data. We do this to correlate other pieces of information and improve our understanding. We don't do it to violate privacy; we do it because that's how it is done. Don't like it? Too bad. This is how it has been done since forever. This is how police do their work--they gather up different pieces of information and analyze them and interpret them. The world of intelligence didn't spring into existence on September 12, 2001.

This country is still at war with the tactic of terrorism. The Congress has authorized the President to defend America. Last time I checked, Dick Cheney was free and clear and still part of the national security establishment. As bad as you think these people are, they're accountable to the rule of law. Everything that has been said so far has buried the lede--no one has broken existing laws. In this country, that means something--the rule of law still means legitimacy and anyone challenging the legitimacy of the United States needs to remember that fact. And Mr. Snowden is running around Hong Kong, boasting about what he knows and how he's going to tell everyone the truth. He has violated his agreement to safeguard classified information primary because he learned something that "he" could no longer live with that is, in fact, legal under U.S. laws. He has engaged in a public spat with the last superpower on Earth and he is still alive because, well, we're just not the monstrous killers everyone thinks we are, are we?

If that's not megalomania, I don't know what is.