Data Mining Metadata Has Been Legal For a Long Time 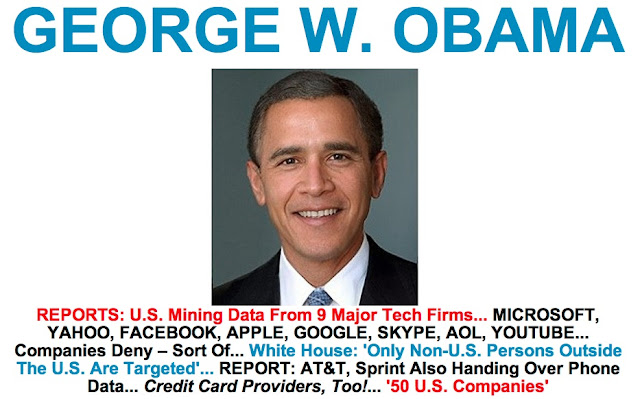 The left now has a reason to turn on President Obama.

When you see these "George W. Obama" stories, then you know that the President is going to be impeached by the Republicans for abuse of power. It's not a question of whether he will be impeached--it's a matter of when. BEFORE the mid-terms or right after? And they will get away with it because people on the left are too uninformed to understand any of this. They see "Government Can Hear Your Phone Calls!" and other such nonsense and then their inherent inner self starts panicking about all those times they said bad things about black people or Jews or the government or their mother-in-law and they think that everyone will know how shallow/racist/incompetent they are.

Data mining has been legal for years. Everything that falls under the scope of what the Obama Administration is doing is legal. You may not like it, but it falls under the authority of the FISA court, which is what the Bush Administration ignored. And if you still don't like it, then, too bad because we gave up privacy in a panic over a decade ago.

Everyone who is crapping themselves today over this is guilty of closing the barn door after the horse ran off years ago. Talk about a non-story.

This is not that difficult to understand--our enemies know we value privacy and freedom, so they use that to mask their communications. They use American companies to communicate with one another. They use encryption and they use things like Yahoo and Gmail and whatever else to send information, hoping it will get lost in the vast streams of data that transit the world; they hide themselves by looking like SPAM.

You are already being spied on by what I would say are over forty sophisticated spying agencies located throughout the world, all of them under the control of foreign governments that don't care about anyone's privacy.

There is an inherently American belief that we are number one, that we are exceptional, and we are always the ones doing bad things. This is the American Guilt Complex, writ large. That's what makes it difficult to believe that we really do have enemies and that they are motivated by chipping away at America's ability to project power into distant regions.

You think we're bad? How would you feel if the Chinese had all of your E-mails? How would you feel if you knew that the French have your banking information? Do you really think there is one spy agency in the world? There are at least forty that are really, really good and the rest get lucky. At some point, the world will be databased and stored multiple times over in repositories far and wide. If information is power, why wouldn't everyone capable of seeking that power be stockpiling it any way that they can? Moreover, why should you care if the US government is data mining metadata?

Everyone is mining data. That's how the world works. If it is digital, and moving through routers and switches, then the world knows your business. Grow up.

Thanks to Glenn Greenwald, the left will abandon the President and his foolish enemies will stumble over acorns like blind pigs, occasionally finding something they can use. The president is on his way to being impeached.

Good luck with that.

The number one story in American should be the massive, deep, and vicious cuts to the food stamps program. You will hear nothing about this because someone, somewhere might be listening to someone's dopey butt dialing call to their ex-girlfriend.

We continue to be distracted by the wrong thing at precisely the wrong time.
on June 06, 2013