When Has Europe Ever Been United? 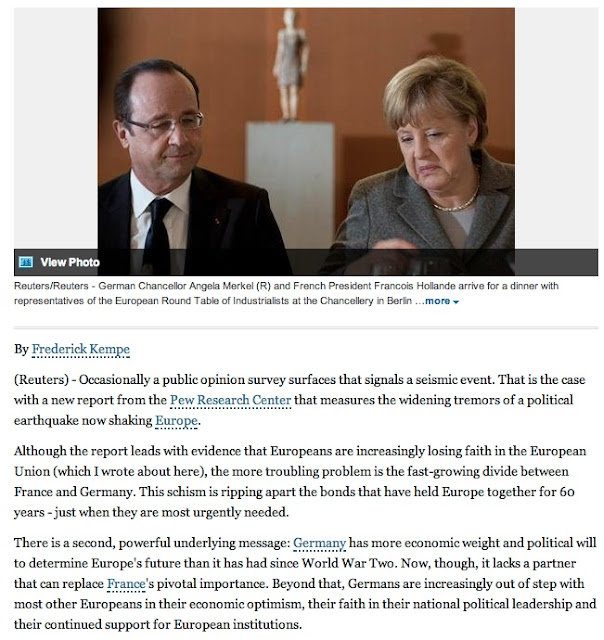 This is boilerplate nonsense from Frederick Kempe. Why anyone would read this and think of themselves as being "informed" is beyond me. Every cliche, every standard piece of groupthink, and every misconception seems to have found a way into Kempe's piece.
The political earthquake shaking Europe is plain to see. Austerity is a fool's errand and it has been carried out without the benefit of actual politics. Angela Merkel is being sacrificed in Germany to carry out this terrible policy; Francois Hollande wants to tax the rich and bring France to an equal footing with Germany. This is what the voters in these countries want, and they are getting what they voted for.
In these two countries, politics are working. In the rest of Europe, politics are not working. The voters in countries like Spain, Ireland, Greece and Italy have no say in what the Germans, and their French partners, are forcing onto them. And so, Germany doesn't really have the power--it has the banks and the euro, and it has things to sell. But the markets are drying up and the jobs are drying up as well. No one is going to 'abandon' the euro (this has been the refrain for years) and no one is going to stop advocating austerity. The pain will continue and resentment will build. But Europe remains stable so long as no one is starving. Once this hits the southern countries of Europe, and once they rise up against their governments and throw them out of power, then and only then will you see cooperation in France and Germany, two countries that have never been united.
Germany and France represent the euro, and the rest of the European nations are dragging the currency down. If you thought this was the plan, you would be correct. The imposition of austerity is being carried out so that Germany and France can effectively control Europe through the Eurozone and through the currency. No one in Spain has any say as to what the Eurozone decides, but there are bankers in both France and Germany who can, and often do, decide what will be done in other countries. Politics have failed and Europe is tied to a currency that it cannot abandon. So, if the standard of living in Spain and Greece has dropped, while rising in France in Germany, why is this a seismic event? It has been the plan all along. The suckers who signed up for this should have been able to understand that, by giving up their control over their own sovereignty, they had to turn it over to the most economically powerful nations. Which have been France and Germany since the Berlin Wall came down (Britain does not count because it operates as an independent nation in everything save NATO).
The German standard of living would shock most Americans, especially in Southern Germany. This is the envy of Europe, and they have every right to be envious because Germany wasn't supposed to end up with the spoils of the Cold War. It was supposed to be the equal of France and Britain and it was supposed to remain split into two separate countries. United, the two German states became a massive manufacturing powerhouse, one that is weakened by the problems in the former East Germany but strengthened by the fact that what used to be West Germany can pretty much make anything the world wants to buy.
The Dutch cross Germany on their way to the Alps; the French pass through as well, but no one really visits one another. They travel to destinations and have their vacations. No one from a town in Bavaria goes to a town in France just to sample the food and see the sights unless it is Disneyland Paris and they go with other Germans. I've seen this myself; there is no united Europe. There are merely freeways, and they are used to get through things, not actually "to" things.
All of the European nations need a political solution to their problems. The people need to have the right to vote on their fate and not have it dictated to them by bankers and people who spend all Spring tending their gardens and living on the cheap, as compared to their neighboring states. One thing I can guarantee you, though, is that the Germans will never understand why no one else can live as well as they do. Their neighbors don't save, they don't live and eat at home, and they don't keep their towns clean. They have all of the old prejudices without acting on them.
Until someone acts on these impulses, business will continue as always, and nothing will change.
on May 14, 2013